Interview with Barbra Annino, author of the Stacy Justice Mysteries, and Giveaway - December 21, 2012

Please welcome Barbra Annino to The Qwillery. Tiger's Eye, the third novel in the Stacy Justice Mystery series, was published on December 18, 2012. 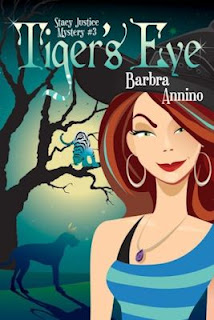 TQ:  Welcome to The Qwillery!  What are some of your writing quirks?

Barbra:  I like to write with a talisman of sorts on my desk that relates to the story I'm working on at the moment. Right now, there's a statue of a gnome standing there, with a pointy hat carrying a sign that reads, "bite me."


TQ:  Are you a plotter or a panster?

Barbra:  Pantser. I find that if I don't know what's going to happen, my readers won't either. It makes for a more interesting read, although I have written myself into a corner a time or two. But I find it challenging to write my way out.

Barbra:  That writing myself into a corner thing I just mentioned. I've been stuck on a plot point for a week or more because I don't plot, and I may grapple with the direction the story takes, but my characters always pull me through.


TQ:  Your most recent novel is Tiger's Eye (A Stacy Justice Mystery 3). What inspired you to write mysteries with paranormal/supernatural elements?

Barbra:  I've been studying alternative religions for years. I'm Irish and that history is steeped in mystery and wonder, and of course, ghost stories. It was a natural extension of my interests combined with my upbringing.

Barbra:  My books are mostly based on the Celtic pagan path. The spells, herbal and gemstone properties, and gods/goddesses mentioned in the Stacy Justice series stem from those beliefs, as well as the historical aspects of the stories such as in Bloodstone. I do, however create some fantasy in my stories that real life witches cannot conjure.


TQ:  What sorts of research have you done for the Stacy Justice Mysteries? What is the oddest bit of information that you’ve come across in your research.

Barbra:  Oh, all kinds! I've researched ancient texts, sites, languages, beliefs, and laws. I've researched weapons, poisons, herbs, medicine, and food. I went to Ireland this past summer to do geographical research for my fourth book, Emerald Isle, which is set there. Much of my research notes are included in the back of each book. Some of it, I can't go into detail here, because it would reveal a plot spoiler. I guess the most surprising thing for me is when I am researching one subject, it will lead me to other new discoveries and knowledge--often times becoming key components in some dramatic twist that makes the story that much better, I love research!


TQ:  Tell us something about Tiger's Eye that is not in the book description.

Barbra:  Okay, that's a toughie because my copywriters are awesome. I would like to point out that this is a series that should be read in order, because the protagonist (and other characters) grows with each story. Each installment also offers new layers to her past, new secrets uncovered, new betrayals to unveil. In this one, however, she really begins to not only accept her calling, but seizes it, while still making mistakes, that lead to hilarious--and dangerous--consequences.


TQ:  In Tiger's Eye who was the easiest character to write and why? The hardest and why?

Barbra:  This is the fourth book I've actually written for this series. Hands down it has to be a Thor-Stacy tie. Stacy, because I write in first person and I just KNOW her now. Thor, because he's based on my first Great Dane and I have three more right now.

The hardest? Probably the dead guy because he doesn't speak, but he plays a big part. You'd have to read it to see what I mean.


TQ:  Which character in the Stacy Justice Mysteries has surprised you the most?

Barbra:  Birdie, Stacy's grandmother. I never know if her actions are a test or a reveal of her true nature. At least, not until the very end.

Barbra:  Emerald Isle, the fourth Stacy Justice novel, will be released in July of 2013. I am also working on a goddess series, as well as several fun shorts. 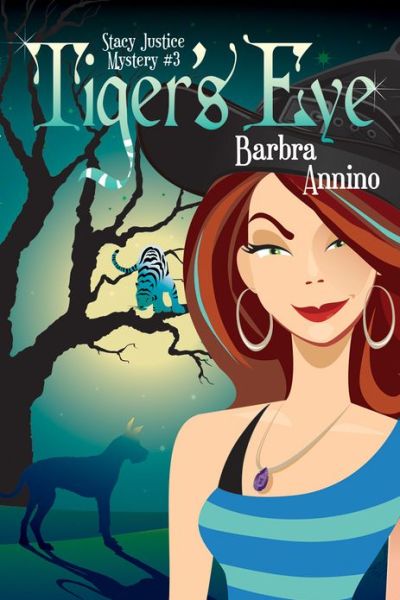 Stacy Justice is looking forward to a lazy summer of hot dogs and beer; swims in the lake with her Great Dane, Thor; and hanging with her rekindled old flame, Chance. But when she gets a creepy anonymous call hinting that her father’s “accidental” death fourteen years ago was actually a murder, she’s too unsettled to relax. Stacy has blamed herself for his death all along—in fact, it’s the reason she’s fought so hard against being a witch. But who’d want to kill an innocent small-time newspaperman?

That’s the question on Stacy’s mind when she casts a spell that goes horribly wrong. And between the white tiger that keeps appearing out of thin air, the body in the lake, the feisty razor-toothed Chihuahua, and the gun-toting maniac, she suddenly has her hands full once again. But solving the mystery of her father’s death is Stacy’s number-one priority…and avenging it, if necessary, is a very close second.

Continuing the thrilling Stacy Justice saga, Tiger’s Eye drives the reluctant witch deeper into the mysteries of her family’s past…and the darker regions of her soul. 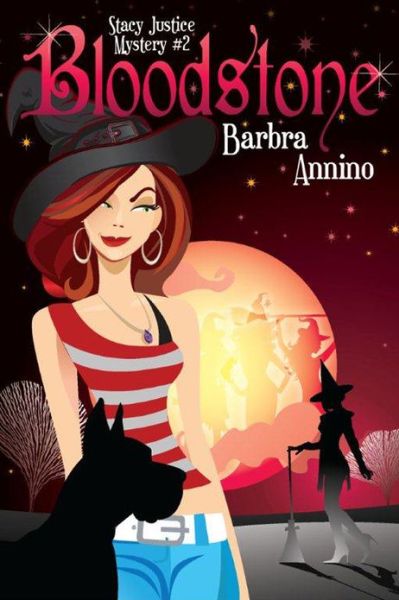 All Stacy Justice wants to do is recover from the bizarre couple of weeks she’s had — a whirlwind kicked off by the arson attack on her cousin’s bar, the Black Opal. But just when life should be settling down, a fourteen-year-old girl named Ivy appears on Stacy’s doorstep, claiming to be her sister. Ivy says their mother’s life is in danger and insists that the family’s magic is crucial to saving her. Sure, Ivy has Stacy’s fiery red hair and green eyes — but is she really her sister? And can the secretive teen be trusted with magic?

Then a man is found dead at Stacy’s grandmother’s bed-and-breakfast, and she has no choice but to see where Ivy’s story leads. Strange warnings appear at every turn, including the disappearance of the family’s Blessed Book, and it seems someone is out to kill Stacy — again.

Picking up where Opal Fire left off, the second book in the spellbinding Stacy Justice series dazzles with even more magic, mystery, and mayhem — revealing the dark secrets of the Geraghty clan. 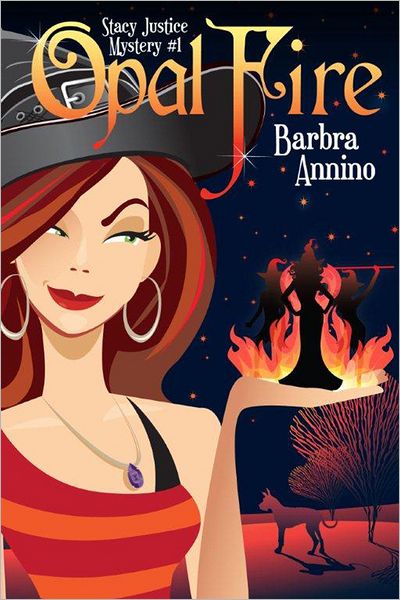 Stacy Justice is just your average green-eyed, redheaded, twenty-something witch who would rather focus on her job as a reporter than practice the crazy magic her grandmother and great-aunts are into. She’s perfectly content to spend her free time hanging with her cop boyfriend and her gassy Great Dane and helping her cousin Cinnamon run the Black Opal bar. But when the Opal goes up in flames, Stacy may need that magic after all.

The blaze was arson—and Cinnamon is the prime suspect. Determined to clear her cousin’s name, Stacy digs deep into the crime and makes a shocking discovery amid the rubble. It’s clear someone wants her dead— and she’ll have to dodge everything from angry motorists to exploding chickens to survive. It’s time to dust off her so-called magic skills. But will they be there when she needs them?

With its strong, sexy heroine and her razor-sharp wit, and its collection of eccentric small-town characters, Opal Fire introduces a bewitching new mystery series. 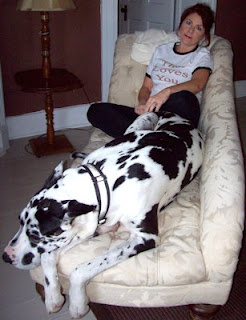 Barbra Annino is a Chicago native, a book junkie and Springsteen addict. A former bartender and humor columnist for Illinois Magazine, she finds the funny in just about everything. Except those Humane Society commercials, which she holds personally responsible for the reason she has three Great Danes.

She lives in picturesque Galena, Illinois where she ran a Bed and Breakfast for five years. Now, she's a happily married freelance writer and Lowe's regular who is constantly covered in dust and paint thanks to an 1855 brick home, which her family shares with friendly spirits. Or not. But that's what people tell her.

She has just completed EMERALD ISLE, the fourth book in the Stacy Justice series.

What:  Five commenters each will win one print copy of Tiger's Eye (A Stacy Justice Mystery 3) from Barbra!


You are researching a location for a novel. Where are you going?

Who and When:  The contest is open to all humans on the planet earth with a mailing address. Contest ends at 11:59pm US Eastern Time on Friday, January 4, 2013. Void where prohibited by law. No purchase necessary. You must be 18 years old or older to enter.