The holidays are nearly upon us. Run and hide. Not really. Here is a short guide (Part 1) to cookbooks for the genre lover in your life (including you).  All of these cookbooks are currently available from a variety of sources. I may blog about genre cookbooks that you will have to find used at some point. Please note that I did not include self-published cookbooks because there are just so many of them!

A Feast of Ice and Fire
The Official Game of Thrones Companion Cookbook
Bantam, May 29, 2012
Hardcover and eBook, 240 pages 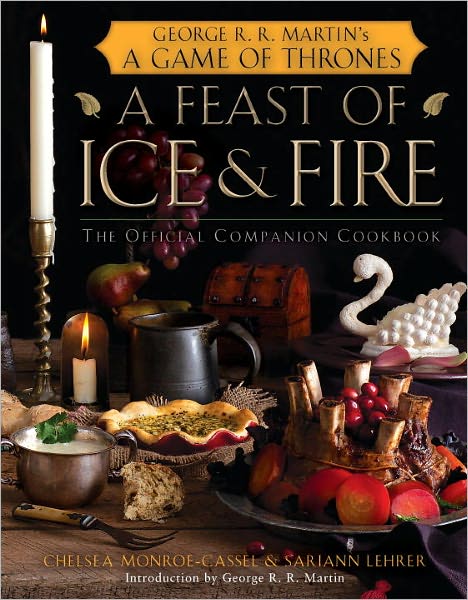 Ever wonder what it’s like to attend a feast at Winterfell? Wish you could split a lemon cake with Sansa Stark, scarf down a pork pie with the Night’s Watch, or indulge in honeyfingers with Daenerys Targaryen? George R. R. Martin’s bestselling saga A Song of Ice and Fire and the runaway hit HBO series Game of Thrones are renowned for bringing Westeros’s sights and sounds to vivid life. But one important ingredient has always been missing: the mouthwatering dishes that form the backdrop of this extraordinary world. Now, fresh out of the series that redefined fantasy, comes the cookbook that may just redefine dinner . . . and lunch, and breakfast.

A passion project from superfans and amateur chefs Chelsea Monroe-Cassel and Sariann Lehrer—and endorsed by George R. R. Martin himself—A Feast of Ice and Fire lovingly replicates a stunning range of cuisines from across the Seven Kingdoms and beyond. From the sumptuous delicacies enjoyed in the halls of power at King’s Landing, to the warm and smoky comfort foods of the frozen North, to the rich, exotic fare of the mysterious lands east of Westeros, there’s a flavor for every palate, and a treat for every chef.

These easy-to-follow recipes have been refined for modern cooking techniques, but adventurous eaters can also attempt the authentic medieval meals that inspired them. The authors have also suggested substitutions for some of the more fantastical ingredients, so you won’t have to stock your kitchen with camel, live doves, or dragon eggs to create meals fit for a king (or a khaleesi). In all, A Feast of Ice and Fire contains more than 100 recipes, divided by region:
There’s even a guide to dining and entertaining in the style of the Seven Kingdoms. Exhaustively researched and reverently detailed, accompanied by passages from all five books in the series and full-color photographs guaranteed to whet your appetite, this is the companion to the blockbuster phenomenon that millions of stomachs have been growling for. And remember, winter is coming—so don’t be afraid to put on a few pounds. 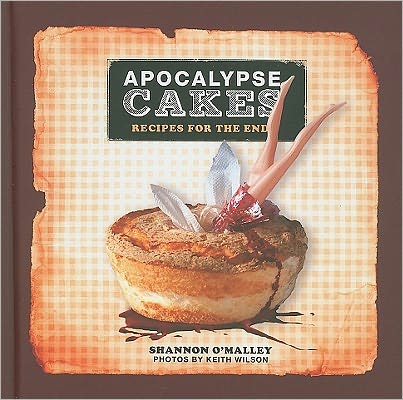 We are besieged with talk of crisis, meltdown, earthquakes, sink holes, global warming, bailouts, and more. Once you realize there's not a whole lot of time left, grab a Bundt pan and whip up your own scrumptious Fallen Angel Food Cake--or one of the other 29 apocalyptic cakes in this irreverent cookbook--and indulge in your final days. Each full-color dessert photograph is accompanied by a short hilarious description. 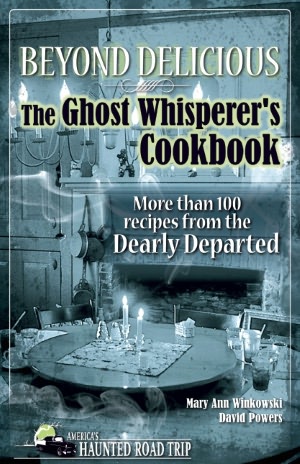 Beyond Delicious: The Ghost Whisperer's Cookbook includes more than 100 recipes given to her through communication with spirits of great cooks who have passed on. Arranged as 2-page spreads, each entry includes a recipe as well as the story of how the author came to learn it. Beyond Delicious, then, is part cookbook and part ghost story anthology. Together these elements create the most entertaining cookbook of the season. 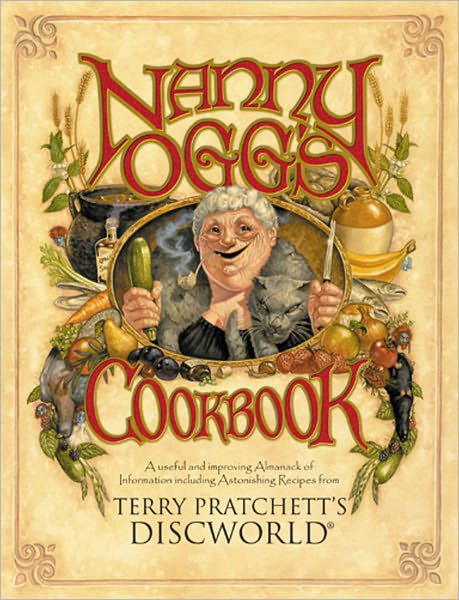 'They say that the way to a man's heart is through his stomach which just goes to show they're as confused about anatomy as they gen'rally are about everything else, unless they're talking about instructions on how to stab him, in which case a better way is up and under the ribcage. Anyway, we do not live in a perfect world and it is foresighted and useful for a young woman to become proficient in those arts which will keep a weak-willed man from straying. Learning to cook is also useful.'

Nanny Ogg, one of Discworld's most famous witches, is passing on some of her huge collection of tasty and above all interesting recipes, since everyone else is doing it. But in addition to the delights of the Strawberry Wobbler and Nobby's Mum's Distressed Pudding, Mrs Ogg imparts her thoughts on life, death, etiquette ('If you go to other people's funerals they'll be sure to come to yours'), courtship, children and weddings, all in a refined style that should not offend the most delicate of sensibilities. Well, not much.

Most of the recipes have been tried out on people who are still alive. 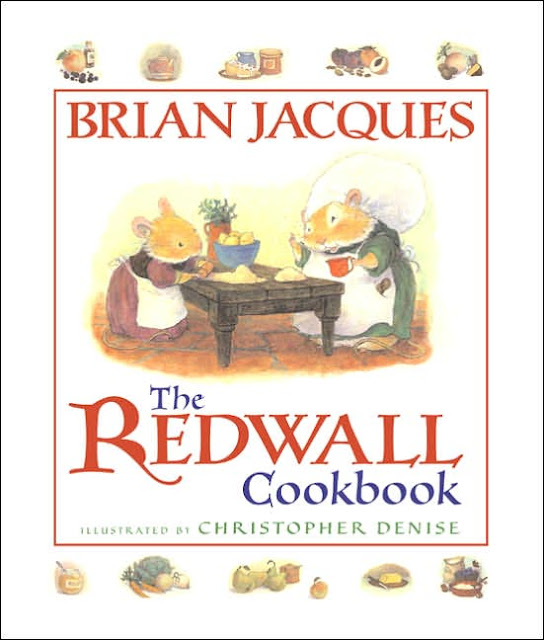 Ever read a Redwall novel and wonder exactly what Abbot’s Special Abbey Trifle is? Or how to make Shrimp ’N Hotroot Soup, that delicacy of otters everywhere? Or Mole’s Favourite Turnip and Tater Deeper ’N Ever Pie? From the simple refreshment of Summer Strawberry Fizz to Great Hall Gooseberry Fool, they’re all here, along with dozens of other favorites sure to turn young hands into seasoned chefs, illustrated in full color with all the charm and magic that is Redwall. A gift like no other for fans of the series, old or new. 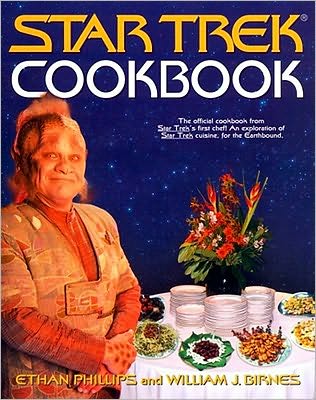 Is there one food that humans, Klingons, Bajorans, and Vulcans would like? If so, what would it taste like? How would you prepare it? Could you find all the ingredients locally?

This is the task that faces Neelix, chef for the U.S.S. Voyager

Ethan Phillips, in the persona of Neelix, and William J. Birnes, the New York Times bestselling coauthor of The Day After Roswell, throw wide the vaults of interstellar haute cuisine, revealing for the first time the secret preparation techniques behind all those exotic dishes and drinks. The favorite foods of characters from every Star Trek series and movie are here, all adapted for easy use in twentieth-century kitchens. The Star Trek Cookbook also features a complete guide for whipping up the all the drinks served at Quark's.

Fun, and easy to use, the Star Trek Cookbook is your indispensable guide to the food of the stars! 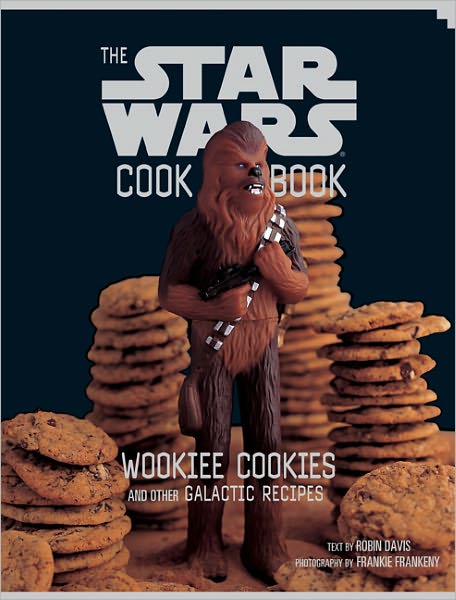 Boba Fett-Uccine and Princess Leia Danish Dos are just the beginning when the Force is with you in the kitchen. Wookiee Cookies is your invitation to fine culinary experiences in the Star Wars frame of mind. From C-3PO Pancakes to Jedi Juice Bars, this intergalactic Star Wars cookbook features healthy snacks, delicious dishes, sweet treats, and easy main courses no Rebel can resist. With hilarious photos and safety tips for cooking on Earth as well as in most space stations, Wookiee Cookies even includes a sheet of shiny Star Wars stickers. Age is no issue when it comes to Star Wars cuisine-kids as well as adults will have a great time with this book. Whether you drove to your first Star Wars flick or just had your fifth birthday, there's no reason you can't whip up some Crazy Cantina Chili at near light speed. 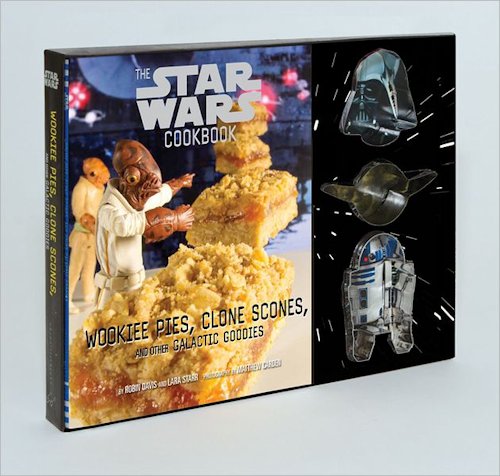 May the Force be with all aspiring Jedi cooks as they use Yoda, Darth Vader, and R2-D2–shaped cookie cutters to create 30 sweet and savory treats! From Chocolate Chewies to Obi-Wan Tons, this galactic cookbook features easy-to-make recipes for Star Wars–themed treats that will delight any Jedi appetite. 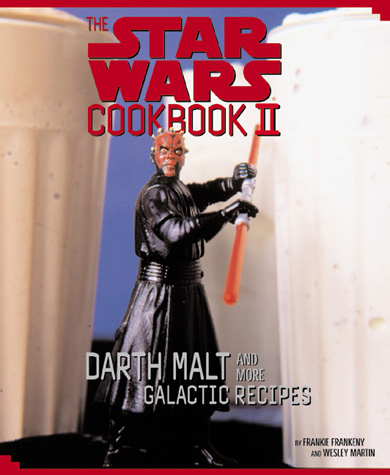 Even the pickiest of Gungans will eat their fruits and veggies when Bubble City Salad and Boss Nass Broccoli are on the menu. With this exciting new sequel to the best-selling The Star Wars Cookbook: Wookiee Cookies and Other Galactic Recipes, Star Wars fans of all ages can cook up more out-of-this-world fun. From razor-toothed Opee's Sea Crunch (for fish fillets with a real bite) to Darth Double Dogs (doubling as a light saber you can eat!), this intergalactic Star Wars cookbook features healthy snacks, delicious dishes, sweet treats, and easy main courses no Rebel can resist. Featuring hilarious photographs and recipes and wipe-clean pages, The Star Wars Cookbook II even includes a shiny plastic stencil of Darth Maul to help decorate culinary creations. And age is no issue when the Force is with you-adults as well as kids will have a great time with this book. 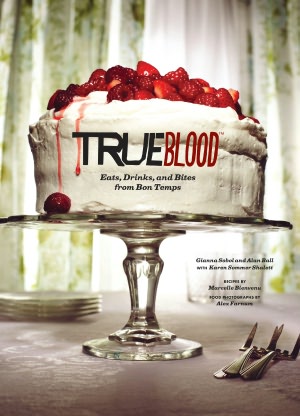 True Blood, HBO’s blockbuster paranormal drama, enthralls a diverse audience of 13 million viewers (and counting). Menus at the now-famous Fangtasia and Merlotte’s Bar and Grill play a key role in the series, providing sustenance for its human characters, evoking memories of a bygone life for its vampires, and serving as a powerful symbol for the desires and carnal needs the characters harbor. It’s no wonder so many fans revel in at-home parties inspired by the food on the series! With recipes from unforgettable scenes, each entertainingly introduced by True Blood’s most compelling characters, these 85 authentic bayou country recipes and 150-plus photos from the series give fans a big taste of Bon Temps.


In Part 2 - Unofficial cookbooks, Zombie Cupcakes, Ghoulish Goodies...
Posted by Qwill at 9:06 AM