Please welcome David Constantine to The Qwillery. David's novel, The Pillars of Hercules, will be published in March by Night Shade Books.


Thanks to all of you for hosting me on the Qwillery; it’s great to be here. And for your consideration I’d like to offer the cover art for my debut THE PILLARS OF HERCULES, due out from Night Shade Books next month. I think Night Shade did a bang-up job with this; they created a cover that’s at once both in-your-face and subtle. For a start, we know immediately this is a book that’s set in the ancient world—the helmets and swords and armor may as well have come straight out of 300, and the fact that most of the background (where a city can dimly be seen) is engulfed by inferno allowed the artist to deploy really vibrant colors, combined with earthier tones on the back. 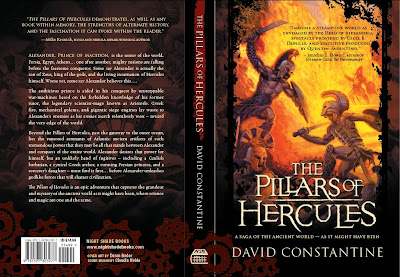 And I love that red streak down the spine, just behind my name. Too often covers are simply viewed as a function of the book front-piece itself, but to me it’s the entirety of the external art. And if you look closely at both the front and back you’ll see a lot of wheels and gears--a little hard to spot on the front, but hard to miss on the back, thereby underscoring the steampunk heart of the book. The cover blurb spells it out: “A saga of the ancient world – as it might have been”, and that’s what I’ve done here: created an ancient world on the cusp of a steam-driven industrial revolution, and placed Alexander the Great at the center of it. What the uninitiated in the book call magic is really forbidden technology, and sorcerers and mechanists are terms that are used interchangeably by those in the know. So the book goes well beyond just a giant epic battle (though there’s plenty of those!), ultimately giving us a view of the edges of a world that wasn’t…..a view provided by Night Shade’s cover, for which I count myself most fortunate.


About The Pillars of Hercules 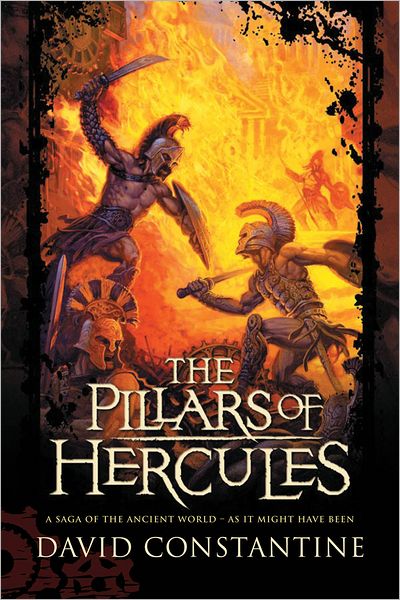 Alexander, Prince of Macedon, is the terror of the world. Persia, Egypt, Athens . . . one after another, mighty nations are falling before the fearsome conqueror. Some say Alexander is actually the son of Zeus, king of the gods, and the living incarnation of Hercules himself. Worse yet, some say Alexander believes this . . . .

The ambitious prince is aided in his conquest by unstoppable war-machines based on the forbidden knowledge of his former tutor, the legendary scientist-mage known as Aristotle. Greek fire, mechanical golems, and gigantic siege--engines lay waste to Alexander's enemies as his armies march relentlessly west--toward the very edge of the world.

Beyond the Pillars of Hercules, past the gateway to the outer ocean, lies the rumored remnants of Atlantis: ancient artifacts of such tremendous power that they may be all that stands between Alexander and conquest of the entire world. Alexander desires that power for himself, but an unlikely band of fugitives--including a Gaulish barbarian, a cynical Greek archer, a cunning Persian princess, and a sorcerer's daughter--must find it first . . . before Alexander unleashes godlike forces that will shatter civilization.

The Pillars of Hercules is an epic adventure that captures the grandeur and mystery of the ancient world as it might have been, where science and magic are one and the same. 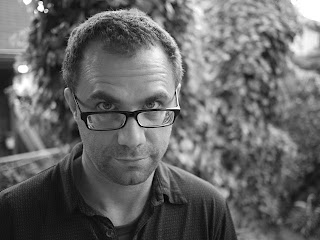 David Constantine lives in Los Angeles with his not-so-loyal army of cats. THE PILLARS OF HERCULES is his first novel.
Posted by Qwill at 8:58 AM