Please welcome Anne Lyle to The Qwillery as part of the 2012 Debut Author Challenge Guest Blogs.

Historical research
Don’t despair if you don’t have that kind of background, however; there are lots of other hands-on ways to learn about a historical period. For starters, any kind of practical experience is very helpful. If you’re the active type, you could take riding lessons or learn to fence. If that’s not an option, how about making your own bread, growing herbs, or learning calligraphy? I’ve done most of these (fencing is on my to-do list this year!) and more - it really helps in adding all the little sensory details to a scene if it’s something you’ve actually experience rather than relying on your imagination. If you have plenty of spare time, you could even join a re-enactment group, which will give you access to lots more information and resources.

The biggest part of historical research, of course, is reading books. Not so much the kind of history books you read in school, all about kings and queens and politics - though of course you need to know that stuff - but the details of everyday life. What did people eat? What did they believe? How did they entertain themselves? I have a whole shelf of books about Elizabethan England, of which my favourite is probably The A to Z of Elizabethan London. It's an enlarged version of a map drawn in around 1570, with annotations helping you to identify streets, churches and other salient features. With it, I can plot my characters’ movements around the city as if I were really there. Even more cool, I can navigate my way around present-day central London using my mental map of its sixteenth-century layout. The buildings may be concrete office blocks instead of timbered houses, but you can still walk from the Globe Theatre to the Tower of London by crossing the river and then following Thames Street eastwards. (It takes about twenty minutes, by the way; I timed it on one of my research trips.) 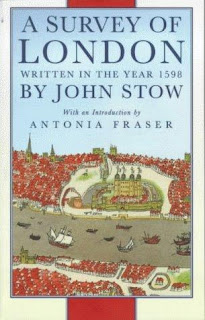 Reprints of books from your chosen era are an invaluable resource
That brings us to my favourite part: visiting historic locations. I visited the Tower of London twice whilst writing The Alchemist of Souls, once for a general reconnoitre, once to research specific locations in detail. I've been inside various medieval and Elizabethan houses, from Kent to Yorkshire and from Suffolk to North Wales, and even stayed in a Renaissance house in Venice when researching my second novel, The Merchant of Dreams. Nothing can compare to actually walking into rooms where sixteenth-century people once lived, sometimes amidst incredible opulence but more often in very spartan style. 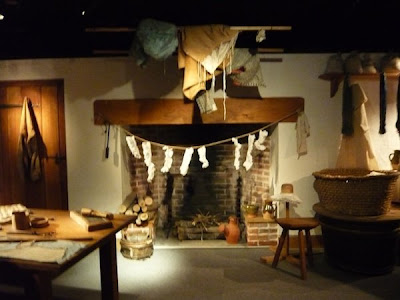 Museums, like this one at the Globe Theatre, often include
displays of everyday scenes with replica artefacts
But what if you don't live in the UK and can't travel to all these wonderful places? Thanks to modern movies and TV shows, you can still get a glimpse of real historic locations, and better still they may recreate places that no longer exist. Of course you have to take anything you see with a pinch of salt and back it up with proper research, because the purpose of these productions is to entertain not educate, but the best of them will give you a good feel for the period. I recommend being particularly wary of the portrayal of historical events and characters, because these are the most likely to be manipulated for dramatic purposes. On the whole, costumes and sets are pretty accurate these days, but even then you can't be certain; the creators of the two "Elizabeth" movies starring Cate Blanchett commit all manner of inaccuracies in the name of visual drama. Ironically I found Shakespeare in Love more useful as a visual reference, despite its self-conscious anachronisms like the "priest of Psyche" (Will Shakespeare's therapist). The picture we get of Southwark, as a semi-rural place of muddy lanes and market stalls, is pretty close to the impression I get from sixteenth century maps of that area.

In summary, if you want to research a period for a novel, you need to take a multi-pronged approach and use every resource at your disposal. Really immerse yourself in the period, reading both modern-day books and, where available, writings from that time. Watch films, listen to music, learn some practical skills. The more you can get into the mindset of a historical person, the better, because good historical fiction is about putting all that research in context and showing the world through the eyes of someone who is actually living that life.


About The Alchemist of Souls 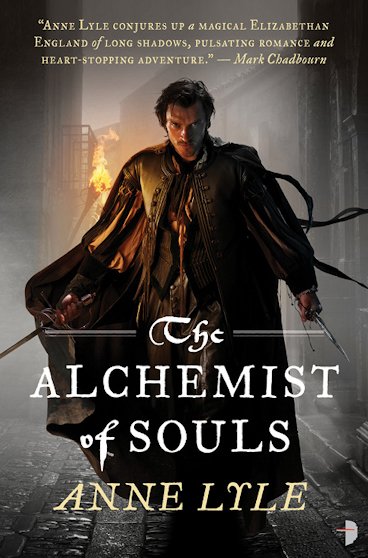 When Tudor explorers returned from the New World, they brought back a name out of half-forgotten Viking legend: skraylings. Red-sailed ships followed in the explorers’ wake, bringing Native American goods – and a skrayling ambassador – to London. But what do these seemingly magical beings really want in Elizabeth I’s capital?

Mal Catlyn, a down-at-heel swordsman, is seconded to the ambassador’s bodyguard, but assassination attempts are the least of his problems. What he learns about the skraylings and their unholy powers could cost England her new ally – and Mal Catlyn his soul.

Anne Lyle was born in what is popularly known as “Robin Hood Country”, and grew up fascinated by English history, folklore, and swashbuckling heroes. Unfortunately there was little demand in 1970s Nottinghamshire for diminutive swordswomen, so she studied sensible subjects like science and languages instead.

It appears, however, that although you can take the girl out of Sherwood Forest, you can’t take Sherwood Forest out of the girl. She now spends practically every waking hour writing – or at least planning – fantasy fiction about dashing swordsmen and scheming spies, set in imaginary pasts or parallel worlds.