Please welcome Tamara Hogan to The Qwillery as part of the 2011 Debut Author Challenge interviews.

Tamara:  Great question! Hmm, probably how I use music as a tool to get in the writing zone. Rather like how a dog knows it’s time for walkies when a leash is snapped to its collar, clapping on a headset means it’s time to write. In addition to the headset blocking out background noise wherever I happen to be writing, music triggers emotional reactions in me very quickly—don’t put on The Finale of “Wicked” unless you want to see me bawl like a baby! Knowing that, I’ve created some iPod playlists that help me more quickly access the emotional state of the POV character I happen to be writing that day. I’m also influenced by a song’s pace. When the music I’m listening to is fast, I type fast—kinda like how, when you’re rocking out in the car, driving down the highway, you look at the speedometer and notice that, somehow, you’re driving a good 15 miles over the speed limit? ;-) I consciously use this reaction as a productivity tool when I’m doing writing sprints or fast-drafting. Current favorite: The Prodigy’s “The Fat of the Land,” listening straight through.

Tamara:  I’ve always been a genre girl. Early Anne Rice—her vampires, and “The Witching Hour”—was a huge influence. I love Stephen King. I’ve read (and own) everything Nora Roberts has ever written, and her work has taught me so much about dialogue tagging and pace. I’m always delighted by dark and twisted, so there are times when only Anne Stuart will suffice. I’m a big “Dune” fan, and I love Lois McMaster Bujold’s Vorkosigan saga. There are phases in my own writing process where I simply can’t read Bujold because she’s so good it psyches me out. Nalini Singh is simply a goddess to me.

Tamara:  I’ll go hybrid with this answer and say I’m a…pantsalotter? At the beginning of the writing process, I do a fair amount of character development work, have a pretty firm idea of the hero’s, heroine’s and villain’s goals, motivations and conflicts. I’m aware, at a very high level, of how the story I’m working on has to drive the overall Underbelly Chronicles series arc. I typically know how I want to begin and end the story, I have a fuzzy vision of several key plot points, and I typically have a short list of scenes I think I’ll need. Then I…fly into the wind. The plot firms up along the way.

TQ:  What inspired you to write Taste Me?

Tamara:  Music, of course. ;-) I was watching a famous band perform, and was absolutely riveted by the…debauched?...behavior of the drummer. I remember thinking, “He must be half incubus.” Something in my head went click, and I started writing (world-building) the next morning.

TQ:  What sort of research did you do to create the world of the Underbelly Chronicles?

Tamara:  Building this world was a blast, because I, very selfishly, found a way to utilize so many of my personal interests. I revisited classic mythology, sought out ancient religious texts, studied modern pop culture, expanded upon my own technical knowledge, and gleefully delved into futuristic science and theory. One of the first issues I had to consider was the creatures’ origin story. If I was going to propose that mythological creatures were real—and I was—how did they come to exist in the first place? Did they evolve here, alongside humanity, or did they come from someplace else entirely? I found the latter idea to be much more fertile ground from a story-telling perspective. I loved twisting our “known” history to accommodate their very existence.

TQ:  Without giving anything away, what is/are your favorite scene(s) in Taste Me?

Tamara:  I think it’s a tie between the first time Lukas and Scarlett share a scene in the book (excerpt here! Mature readers only), and the concert scene, which spans several chapters and zigzags back and forth between Lukas’s and Scarlett’s point of view. I live near Minneapolis, home of First Avenue—the club Prince made famous in “Purple Rain”—and I’m fortunate to have had years of access to a vibrant live music scene. I’m still trying to weigh just how many concert tickets I can reasonably write off as business expenses. J

Tamara:  The Underbelly Chronicles is plotted through nine books, but the world is complex enough to support additional stories of any length. Most of the characters introduced in TASTE ME will be featured as heroes or heroines in later books in the series. (Readers are already asking for Lukas’s sister Sasha’s story!) Sourcebooks has contracted the first trilogy in the series, and I have high hopes that readers will want to visit the Underbelly again and again!

Tamara:  I just typed THE END on the second book of the Underbelly Chronicles series, CHASE ME, which teams up Valkyrie archaeologist Lorin Schlessinger with by-the-book werewolf geologist Gabe Lupinsky as they excavate the site where Lorin suspects their ancestors’ spaceship crashed. CHASE ME is scheduled for a March 2012 release. I’m starting research and character development work for TEMPT ME, the third book in the series. In addition, I’ll be at the Romantic Times conference in April—catch me at Club RT Thursday afternoon! —and participating in a panel discussion at RWA National during the last week of June called "The Road to Novel Completion: Potholes, Pit-Stops and Poppy Fields, Oh My!" Follow the yellow brick road as my Ruby Slippered Sisters and I share the tips and techniques that help us dodge life’s flying monkeys and finish that darned novel.

Tamara:  So glad to be here! Thanks so much for the invitation, and the thought-provoking questions. 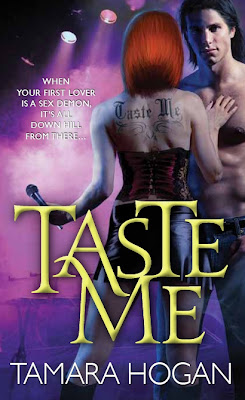 Hot, sexy urban fantasy romance by a new author with talent to burn…

He Wants Her So Badly He Can Taste It…

Ever since their tempestuous fling years ago, incubus Lukas Sebastiani has known that siren Scarlett Fontaine was meant to be his. But when you’re a sex demon with an insatiable desire, relationships are way more than complicated…

Her Siren Songs Bring Men to Their Knees…

Rock star Scarlett Fontaine desperately needs a break after a grueling tour. But with murder and mayhem surrounding her band, and the one man she never thought to see again put to the task of protecting her, life is going to be anything but peaceful…

Every encounter between them creates more turmoil—and heat—until Scarlett pushes Lukas to the boiling point, and unleashes forces that go way beyond anything she can hope to control…

Chase Me (Underbelly Chronicles 2) is slated for release in March 2012. 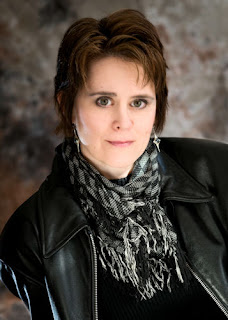 Tamara Hogan loathes cold and snow, but nonetheless lives in the Minneapolis exurbs with her partner Mark and two naughty cats. When she’s not telecommuting as a quality and process engineer for a global networking company, she writes urban fantasy romance with a sci-fi twist. Taste Me was a 2009 Daphne Paranormal Winner and Golden Heart paranormal finalist under the title Underbelly. For more information, please visit http://www.tamarahogan.com/.
Tamara's Links
Website
Ruby Slippered Sisters (group blog)
Twitter

What:  Two copies of Taste Me are being provided by Sourcebooks so 2 commenters will win a copy of Taste Me. A big thank you to Sourcebooks.

How:  Leave a comment answering this question: what music inspires you? Please remember - if you don't answer the question your entry will not be counted.

Who and When: The contest is open to all humans on the planet earth with a mailing address. Contest ends at 11:59pm US Eastern Time on Monday, March 21, 2011. Void where prohibited by law.


*Giveaway rules are subject to change.*
Posted by Qwill at 8:12 AM