Interview with Micaiah Johnson, author of The Space Between Worlds


Please welcome Micaiah Johnson to The Qwillery as part of the 2020 Debut Author Challenge Interviews. The Space Between Worlds was published on August 4, 2020 by Del Rey. 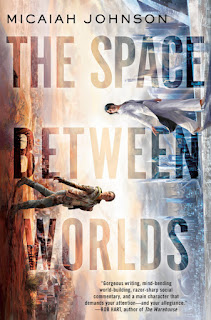 Micaiah:  Noooo, it’s so embarrassing! My grandma had an electric typewriter and I definitely wrote a story where my dogs were detectives who had to solve a chicken’s murder.

Micaiah:  I am a pantser in denial. I will forever be “about to start” outlining.

Micaiah:  You know that news article about the horse who pretends to be dead every time it has to give someone a ride? That’s me with editing. It’s an essential and unavoidable part of my job, and I *hate* it. It’s like listening to my own voice. It’s so painful.

Micaiah:  Everything. I see so much of what has surrounded me manifest in my work. It’s not just what I’ve read – though a childhood spent trapped in the car with my grandmother’s murder mystery audiobooks definitely accounts for my love of twists – it’s my desert upbringing mixed with every late-night bar conversation I’ve ever had mixed with that three-legged cat I petted one time. It’s so exciting to be on the third or fourth read-through and suddenly realize “holy crap, I’m describing my second grade teacher’s house” or something.

TQ:  Describe The Space Between Worlds using only 5 words.

TQ:  Tell us something about The Space Between Worlds that is not found in the book description.

Micaiah:  The House! One of my favorite parts about this world is how the sex providers operate as a community resource, which is a spin on how essential these establishments actually were during the “wild” west period.

TQ:  What inspired you to write The Space Between Worlds?

Micaiah:  Because of my failure at outlining, I often write toward images. For this book, the image I had was someone walking through the desert and coming upon their own face. I was captivated by it. The desert is such a lonely place. The plant life is low and sparse, so you can never delude yourself that there is anyone around you. You are alone, and you utterly know it. Imagine being in that setting and finally coming up on another human, and that human is you. Their face is your face. Are you still alone? Does this count? I kind of started from there and went off.

TQ:  What sort of research did you do for The Space Between Worlds?

Micaiah:  Tons, and all entirely outside of my field. I owe so much to Brian Greene, Carlo Rovelli, and Michio Kaku for being the kind of very smart scientists whose writing is also accessible enough for a lit major to learn something from it.

TQ:  Please tell us about the cover for The Space Between Worlds.

Micaiah:  The breathtaking American cover for the book is actually an oil painting by artist Cassandre Bolan, and the moment I found out she was my artist I was stoked. I remember her website saying something along the lines of, “I create strong women in fantasy to inspire strong women in reality” and I was instantly like “gimmie gimmie I need it!” I knew featuring two queer women of color on the cover would be audacious, but I couldn’t have predicted it would be so beautiful.

TQ:  In The Space Between Worlds who was the easiest character to write and why? The hardest and why?

Micaiah:  Exlee was both! I loved writing Exlee, but I also know them and deeply wanted to get them right which paralyzed me. What (very) little nonbinary representation we get is often Eurocentric: straight-bodied white people in monochrome vests. And that is absolutely valid as a nonbinary expression, but it’s not the only valid expression, and pretending it is leaves out cultures where gender expression is more bombastic. Trying to tackle this character with that in mind was a ton of joy and a lot of pressure.

TQ:  Does The Space Between Worlds touch on any social issues?

Micaiah:  Certainly, I think anytime you are talking about walls – like the walled city in my book – you are actually talking about borders and immigration. Likewise, anytime you are dealing with a super-advanced tech city of the future, you are also talking about Western capitalism and at what cost that advancement has been bought. I would argue that Science Fiction as a genre, by virtue of daring to imagine alternate futures, is always operating in the territory of social issues…even if by omission.

TQ:  Which question about The Space Between Worlds do you wish someone would ask? Ask it and answer it!

Micaiah:  “Was Dell based on Mr. Darcy from Pride and Prejudice?” so I can scream “YES! YES! THANK YOU FOR NOTICING! YES!”

TQ:  Give us one or two of your favorite non-spoilery quotes from The Space Between Worlds.

“What they don’t tell you about getting everything you’ve ever wanted is the cold-sweat panic when you think about losing it. For someone who’s never had anything to lose, it’s like drowning, all the time”

“Killing should take longer than a heartbeat. Murder should be unignorable, always.”

Micaiah:  I’m so torn about next steps. Part of me wants to spend more time in this world and with these characters, part of me wants to take a dramatic turn and write horror or a cookbook (which is just saying “horror” again, since I truly can’t cook). I can’t be trusted. I’m easily bored and impossible to satisfy. 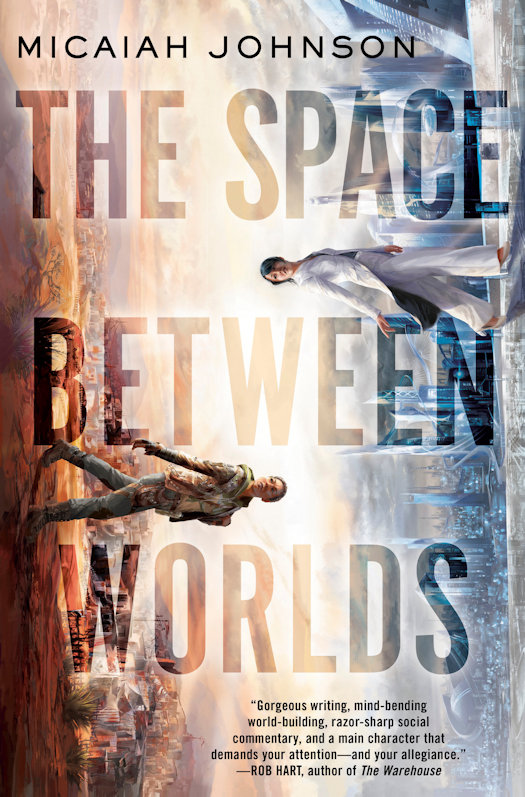 An outsider who can travel between worlds discovers a secret that threatens the very fabric of the multiverse in this stunning debut, a powerful examination of identity, privilege, and belonging.

“Gorgeous writing, mind-bending world-building, razor-sharp social commentary, and a main character who demands your attention—and your allegiance.”—Rob Hart, author of The Warehouse

Multiverse travel is finally possible, but there’s just one catch: No one can visit a world where their counterpart is still alive. Enter Cara, whose parallel selves happen to be exceptionally good at dying—from disease, turf wars, or vendettas they couldn’t outrun. Cara’s life has been cut short on 372 worlds in total.

On this dystopian Earth, however, Cara has survived. Identified as an outlier and therefore a perfect candidate for multiverse travel, Cara is plucked from the dirt of the wastelands. Now what once made her marginalized has finally become an unexpected source of power. She has a nice apartment on the lower levels of the wealthy and walled-off Wiley City. She works—and shamelessly flirts—with her enticing yet aloof handler, Dell, as the two women collect off-world data for the Eldridge Institute. She even occasionally leaves the city to visit her family in the wastes, though she struggles to feel at home in either place. So long as she can keep her head down and avoid trouble, Cara is on a sure path to citizenship and security.

But trouble finds Cara when one of her eight remaining doppelgängers dies under mysterious circumstances, plunging her into a new world with an old secret. What she discovers will connect her past and her future in ways she could have never imagined—and reveal her own role in a plot that endangers not just her world, but the entire multiverse.

Micaiah Johnson was raised in California’s Mojave Desert surrounded by trees named Joshua and women who told stories. She received her bachelor of arts in creative writing from the University of California, Riverside, and her master of fine arts in fiction from Rutgers University–Camden. She now studies American literature at Vanderbilt University, where she focuses on critical race theory and automatons.