Interview with Carole Stivers, author of The Mother Code


Please welcome Carole Stivers to The Qwillery as part of the 2020 Debut Author Challenge Interviews. The Mother Code was published on August 25, 2020 by Berkley. 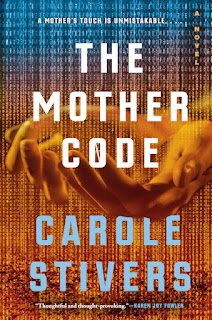 Carole:  The first fiction piece I remember writing was one I penned in about the fourth grade, called “Carbuncle and I.” The story was based on Sherlock Holmes, but the detective and his assistant were cute and cartoonish. I can’t remember the plot, but a picture I drew of the characters is forever etched in my mind.

Carole:  I started out as a pantser, but that wasn’t very rewarding—so much work ended up on the cutting room floor! Now I’m a hybrid. I try to start a novel with a clear beginning and end in mind. Then I write my way through, adding beats on a separate sheet as I go along to guide the narrative. This allows things to take surprising turns, while still maintaining the focus of the original theme and desired ending.

Carole:  I do lots of research before even starting, which is more like work than fun. Then I slog through getting the first draft on paper. But after that comes the joy, when I get to flesh out the story and get more into the characters, their emotions and motivations. For me, the revision phase is best, knowing that I have something solid to work with and to mold.

Carole:  Whenever I start to lose momentum and hope for my work, I find solace in reading good authors. I love new authors who take chances with their writing, like Devi S. Laskar (The Atlas of Reds and Blues) and Rachel Howard (The Risk of Us). And of course I love the greats, like Margaret Atwood, whose prose sinks into the mind so effortlessly, and Isabel Allende, whose worlds are so beautifully built.

Carole:  A child discovers his mother.

TQ:  Tell us something about The Mother Code that is not found in the book description.

Carole:  Kai is not alone in his quest to decide the fate of his Mother. There are other children, two little girls in particular, who are instrumental in his trajectory. And there are many other important female characters who drive the plot.

TQ:  What inspired you to write The Mother Code? What appeals to you about writing Science Fiction.

Carole:  I had the first spark of an idea for The Mother Code while traveling in the desert Southwest with my family in 2003. At the heart of the story, I wanted there to be a reliance by a child on his “Mother” robot in this setting, because, so far as he knew, there was no other life left on the planet. The rest of the story—the origins of the pandemic that set the stage, the origins of the Mothers and their children, the conflict that arose as the children and their Mothers matured and changed, and the few human adults who remained afterward to shepherd the children, all grew out of that original idea.

I was a scientist for many years, and I feel comfortable writing about scientists and laboratory settings. But writing science fiction also allows me to place characters in strange circumstances and watch them fight their way through. By forcing my characters to face the uncanny, I can leverage that “defamiliarization” to ask questions in a fresh way that is not confrontational to the reader and might inspire them to think or feel differently.

TQ:  What sort of research did you do for The Mother Code?

Carole:  I travelled to the sites where my story takes place: the San Francisco Presidio, Los Alamos, the desert Southwest, and the Hopi Reservation in Arizona. I took a tour of the Hopi Reservation, talked to current residents about their lives and livelihoods, and read books about Hopi history and tradition.

I researched robotics and AI to develop a picture of what my Mother robots would have to look like, how they would be programmed, and what materials would be used in their construction. For specifics, I consulted with a good friend who is a pilot, a computer systems manager, and a science fiction fan.

I also researched the genetic engineering of human fetuses, innovative bionic prostheses, and advances in man-machine brain interfaces. One difficult issue I faced was how to destroy most of human life on planet Earth, while leaving all else intact. My “IC-NAN” is based on current research in DNA therapeutics at Northwestern University.

TQ:  Please tell us about the cover for The Mother Code.

Carole:  The cover is meant to depict nurturing in the form of the cupped hands—a protection of something fragile from the hardships of the desert (portrayed in the desert palette colors). The “Mother Code” that directs the hands in their duties is depicted as symbols at the top of the image, which degrade into sand and dust at the bottom of the image to give a sense that the Code itself is fragile.

TQ:  In The Mother Code who was the easiest character to write and why? The hardest and why?

Carole:  For me, Kai was easiest to write. As a child, Kai is a seeker; he came to the story as a blank slate, learning as he went along. The hardest character for me to write was Rick Blevins, a military man—it was difficult for me to avoid stereotypes when writing him. But the most fun to write was Kendra Jenkins, a character who only occurred to me when I was well into the novel. A problem-solver with a can-do attitude, Kendra is most like me in her approach to life, and she has a quirky side to her that I enjoyed portraying.

TQ:  Does The Mother Code touch on any social issues?

Carole:  At the time I began work on The Mother Code, I was most concerned about the possible use of bioagents in warfare and what they might inadvertently do if they got out of control. I know that COVID-19 was not developed for warfare. But it has certainly given rise to greater concern about such agents—which I think is a good thing.

TQ:  Which question about The Mother Code do you wish someone would ask? Ask it and answer it!

Q: Do you really think that a machine like Rho-Z, Kai’s Mother, could be programmed to care for a child?

A: I think that a machine could definitely be designed that would serve the basic needs of a child. The trick would be the human element, which is key for a child to truly thrive. In The Mother Code, that human element develops in a surprising way. But I believe that such an outcome is indeed probable.

TQ:  Give us one or two of your favorite non-spoilery quotes from The Mother Code.

Carole:  My favorite quotes relate to Kai’s instinctive relationship with his Mother:

“But at night, when they were alone, that feeling was as strong as ever— the feeling that he couldn’t possibly know where he ended, and his Mother began.”

“And he responded, not in words but in song—the song of the Mother Code.”

Carole:  I’m currently working on a tale that I call Invasion of the Body Snatchers meets The Story of Your Life. I only hope it matches up to either of those two classics—especially the second, which was written by the amazing Ted Chiang. 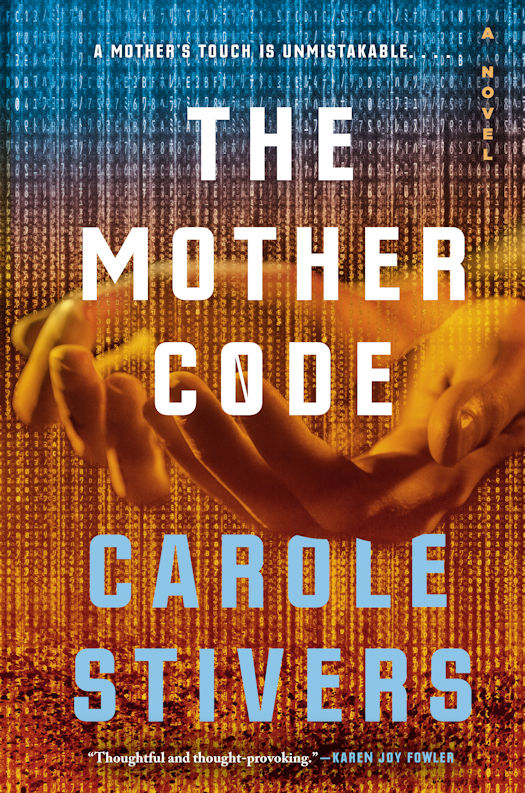 What it means to be human—and a mother—is put to the test in Carole Stivers’s debut novel set in a world that is more chilling and precarious than ever.

The year is 2049. When a deadly non-viral agent intended for biowarfare spreads out of control, scientists must scramble to ensure the survival of the human race. They turn to their last resort, a plan to place genetically engineered children inside the cocoons of large-scale robots—to be incubated, birthed, and raised by machines. But there is yet one hope of preserving the human order: an intelligence programmed into these machines that renders each unique in its own right—the Mother Code.

Kai is born in America’s desert Southwest, his only companion his robotic Mother, Rho-Z. Equipped with the knowledge and motivations of a human mother, Rho-Z raises Kai and teaches him how to survive. But as children like Kai come of age, their Mothers transform too—in ways that were never predicted. And when government survivors decide that the Mothers must be destroyed, Kai is faced with a choice. Will he break the bond he shares with Rho-Z? Or will he fight to save the only parent he has ever known?

Set in a future that could be our own, The Mother Code explores what truly makes us human—and the tenuous nature of the boundaries between us and the machines we create.

Carole Stivers was born in East Cleveland, Ohio. She received her Ph.D. in Biochemistry at the University of Illinois at Urbana-Champaign. She went on to post-doctoral work at Stanford University before launching a career in medical diagnostics. She now lives in California, where she’s combined her love of writing and her fascination with the possibilities of science to create her first novel, The Mother Code.