Please welcome Raymond E. Feist to The Qwillery. Queen of Storms (The Firemane Saga 2) is published today by Harper Voyager. 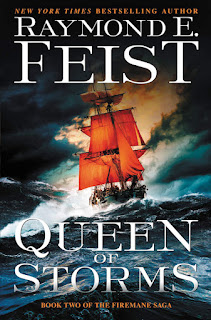 The Qwillery:  Welcome to The Qwillery. You have written over 30 novels. Has your writing process changed over the years?

Raymond E. Feist:  Parts of the process remain unchanged. The thinking the stuff up part, mostly is the same. Getting it down on paper has become a bit more expedient, what I think of as "writers muscle memory." I know when not to look for that perfect word, when to just put something down and come back later to rewrite. Another part is to expect less, that is to be willing to not have every chapter, page, word be priceless. "Murder your darlings" is often attributed to William Faulkner, but he got from Sir Arthur Quiller-Couch, but all good writers eventually come to understand what that means, and I sort of got it in my first book, but by book four I knew exactly what that meant. It references another often misquoted meme, "Don't let the perfect be the enemy of the good."

TQ:  Queen of Storms is the 2nd novel in your Firemane Saga after King of Ashes. How many novels do you have planned for The Firemane Saga?

RF:  It should be a three act play, more or less. My characters have a habit of lying to me from time to time, so the Serpentwar ended up four, and the Demonwar was only two. I do think the next one Master of Furies, will be the last of this series.

TQ:  Please tell us something about Queen of Storms that is not found in the publisher's book description.

RF:  Like a lot of my previous books, there's a "things are not what they seem" element here, and I hope the readers find the surprises the sort that make sense rather than make them want to throw the book across the room, because some of those unexpected changes are terrible for the characters. So, surprises are not found in the description.

TQ:  Who is your favorite character to write in The Firemane Saga so far?

RF:  I don't really have favorites, and never have. Some are a bit more fun to write about, so right now it's Hava and Bodai. Hava because I like strong women characters who aren't basically "a guy in drag," and Bodai because he's a teacher by nature, so I can pedantic in places and the reader blames him and not me.

TQ:  Which question about The Firemane Saga do you wish someone would ask? Please ask it and answer it!

RF:  I can't really think of anything. I've been doing this for almost 40 years now, and have been asked every sort of question from the dumb "what's the book about" by someone who's never read a word of mine to things so insightful my reaction was, "I wish I had thought of that." I think the reason your question is a bit odd for me is that I feel the work speaks for itself. I've observed younger writers try to explain their work, and always think, "Are you going to stand in the bookstore and explain to every reader what you meant?" The book speaks for itself or you are doing it wrong. I look at these interviews as either being to build interest in the coming work, or as retrospectives for me to explain the damnfool choices I made in previous works. I also spend more time avoiding spoilers than thinking about "why didn't they ask me this other thing."

TQ:  Do The Firemane Saga and the Riftwar Cycle share anything thematically?

RF:  In some basic ways, sure. If I was to analyze my own work, which I only do in the editorial sense, not in any scholarly, critical theory fashion, it's that every human being is born into a world that makes no sense, and each of us seeks to bring some order out of chaos. In my writing, how that happens is a function of what sort of person the character is. What I love about that is I can have characters do things that are alien to how I look at everything, and I delight if I think I've pulled off a convincing journey for the reader. I've been taken to task upon occasion by someone who objected to something a character did, so for that reader it was a real thing. Having a character commit murder does not mean I'm personally in favor of murder, is an obvious example. So, overall, the common element in this series and the Riftware is that struggle for awareness and making sense out of an apparently chaotic universe. The tone should be similar as the same guy is writing both.

TQ:  How did it feel to start a new series after so many years with the Riftwar Cycle and are you completely finished with Riftwar?

RF:  I forgot how much time went into world building and constructing believable societies, cultures, and their relationships. The word that comes to mind is "humbling." What I thought I was "dash off" became a year's hard work, bordering on drudgery at times.

Nothing's ever finished. I could change my mind and do another series in Midkemia should I decide. There are always new stories. No one every asked Hemingway if he ran out of stories set on Earth, or Shakespeare why all his plays were set in Europe. So, I might go back to Midkemia someday. I might do another series on Garn, or I might go crazy and try to set up a whole third universe.

RF:  You are very welcome. 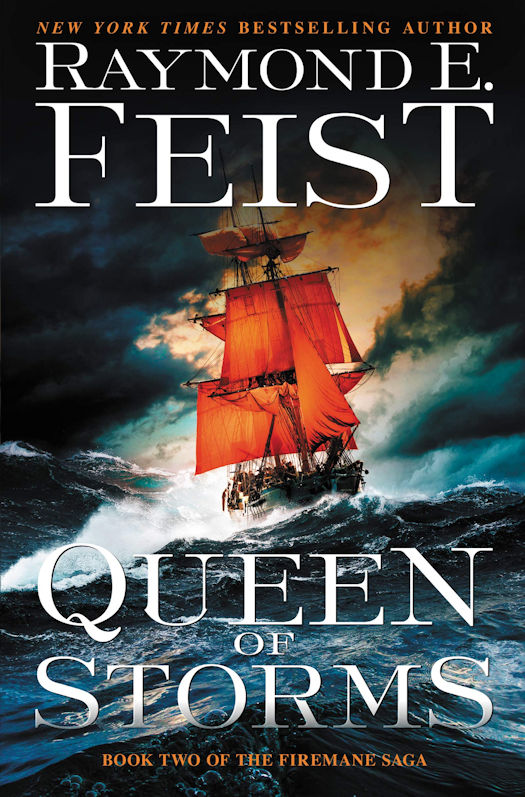 Hatushaly and his young wife Hava have arrived in the prosperous trading town of Beran’s Hill to restore and reopen the fire-damaged Inn of the Three Stars. They are also preparing for the popular midsummer festival, where their friends Declan and Gwen will be wed.

But Hatu and Hava are not the ordinary loving couple they appear to be. They are assassins from the mysterious island of Coaltachin, home to the powerful and lethal Nocusara, the fearsome “Hidden Warriors.” Posing as innkeepers, they are awaiting instructions from their masters in the Kingdom of Night.

Hatu conceals an even more dangerous secret. He is the last remaining member of the legendary Firemanes, the ruling family of Ithrace. Known as the Kingdom of Flames, Ithrace was one of the five greatest realms of Tembria, ruled by Hatu’s father, Stervern Langene, until he and his people were betrayed. His heir, Hatu—then a baby—was hidden among the Nocusara, who raised him to become a deadly spy.

Hatu works hard to hide his true identity from all who would seek to use or to destroy him, as fate has other plans for the noble warrior. Unexpected calamity forces him to make choices he could not have dreamed awaited him.

A series of horrific events shatters the peace of Beran’s Hill, bringing death and devastation and unleashing monstrous forces. Once more, the Greater Realms of Tembria are threatened—and nothing will ever be the same again. 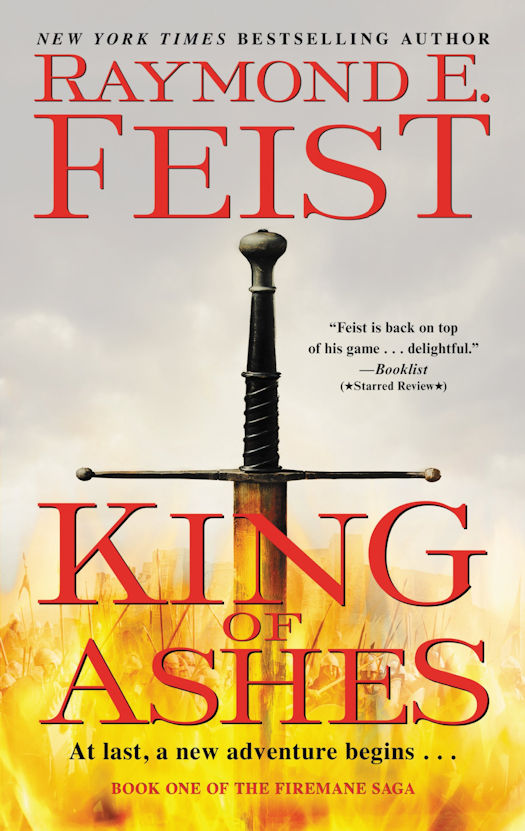 For centuries, the five greatest kingdoms of North and South Tembria, twin continents on the world of Garn, have coexisted in peace. But the balance of power is destroyed when four of the kingdoms violate an ancient covenant and betray the fifth: Ithrace, the Kingdom of Flames, ruled by Steveren Langene, known as "the Firemane" for his brilliant red hair. As war engulfs the world, Ithrace is destroyed and the Greater Realms of Tembria are thrust into a dangerous struggle for supremacy.

As a Free Lord, Baron Daylon Dumarch owes allegiance to no king. When an abandoned infant is found hidden in Daylon’s pavilion, he realizes that the child must be the missing heir of the slain Steveren. The boy is valuable—and vulnerable. A cunning and patient man, Daylon decides to keep the baby’s existence secret, and sends him to be raised on the Island of Coaltachin, home of the so-called Kingdom of Night, where the powerful and lethal Nocusara, the "Hidden Warriors," legendary assassins and spies, are trained.

Years later, another orphan of mysterious provenance, a young man named Declan, earns his Masters rank as a weapons smith. Blessed with intelligence and skill, he unlocks the secret to forging King’s Steel, the apex of a weapon maker’s trade known by very few. Yet this precious knowledge is also deadly, and Declan is forced to leave his home to safeguard his life. Landing in Lord Daylon’s provinces, he hopes to start anew.

Soon, the two young men—an unknowing rightful heir to a throne and a brilliantly talented young swordsmith—will discover that their fates, and that of Garn, are entwined. The legendary, long-ago War of Betrayal has never truly ended . . . and they must discover the secret of who truly threatens their world.

Raymond E. Feist is the author of more than thirty previous books, including the internationally bestselling “Riftwar Cycle” of novels set in his signature world of Midkemia, as well as a standalone novel, Faerie Tale. The Firemane Saga is his first all-new epic fantasy series. He lives in San Diego, California.