Please welcome Michael R. Underwood to The Qwillery! Annihilation Aria, the first novel in his new Space Opera series, will be published on July 21, 2020 by Parvus Press. 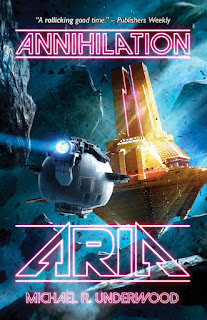 Writing from a Trope Wish List
Some time ago, I heard author Annie Bellet talk about doing herself the favor of making a list of tropes she loved and making sure to use as many as she could to help make a book more fun to write, with the hope that it would then be more fun for readers as well.

The result was her 20-sided Sorceress series, which has done very well and, I think, completely validates this approach.

So, when it came to develop my ideas for what would become ANNIHILATION ARIA, I decided to borrow a page from Annie’s book and build myself a trope wish list.

I grew up on Star Wars as a foundational space opera influence, so anything I write in the more adventure-oriented side of space opera or space fantasy is going to bear the mark of that galaxy far, far away. For ARIA, that influence mostly shows up in the form of including Cool Swords in a setting that mostly features firearms. Lahra’s sword of station is also a BS Fantasy Sword – it would not be practical or effective for a human to use in reality, but looks cool and works for Lahra as an alien warrior hero.

The idea with the trope wish list is to lay out some building blocks instead of developing the novel from scratch. The tropes to use constitute locations, characters, and some worldbuilding elements.

For my main cast, I have Max as my Hero From Earth Far From Home, Lahra as the Last Member of a Warrior People with the Silly Fantasy Sword and Space Magic, and they’re the Happily Married Couple Having Adventures. Then to round out their Found Family, I have Wheel the Cyborg Pilot who connects with/operates the Ship as Home.

Their main port/base is The Wreck, a Gigantic Weird Location (a crashed colony ship-turned city), and then there’s also a space city built on the backs of the Drell, giant space turtles that are Friendly Megafauna. The main bad guys in the setting are Evil Super-soldiers, the galaxy is populated by some other Cool Aliens like the avian Rellix, the Atlan (Wheel’s cybernetics-using species), and the clannish, mercantile Illhari.


Other Ways to Use Tropes While Building a Novel

A broader view of the trope wish list could involve trope-y plot beats, from the Double-Cross or the Hold The Line kind of battle to something like The War Council ala the Death Star briefing. I didn’t really use the trope wish list on the plot level, but if you really like certain types of scenes or are interested in building a story around set-pieces, this approach could be useful. It can give you pillars or centers of gravity for the plot, shaping a story around the core scenes you’re most excited for.

Ultimately, the cool thing about using a trope wish list is that it can help you ramp up your hype for your own novel. Having spent a few years going from novel to novel and reading in the field and paying attention to trends, it was really liberating to re-connect so intentionally and directly with some of my favorite tropes. Tropes aren’t bad, they’re just building blocks. Especially since I ended up writing ANNIHILATION ARIA over the course of several years, revisiting it several times between other projects before taking it over the finish line in 2018. 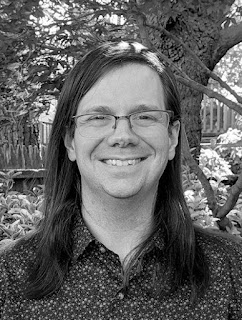 Michael R. Underwood is the author of over twelve books, including Annihilation Aria, Born to the Blade (an epic fantasy serial), the Ree Reyes Geekomancy series and Genrenauts, a series of novellas, which was a finalist for the r/Fantasy “Stabby” Award.

In years past, he danced Argentine Tango and was a member of the Society for Creative Anachronism and studying historical martial arts. Mike has been a hobby game store clerk, a student archivist, a webmaster, a web design teacher, a bear-builder, a bookseller, an independent publishers’ representative, and more.

Mike lives in Baltimore with his wife, their dog Oreo, and an ever-growing library. He also loves geeking out with video & role-playing games, studying historical martial arts, and making pizzas from scratch. He is also a co-host on the actual play show Speculate! and a guest host on The Skiffy and Fanty Show.