Interview with Hester Fox, author of The Witch of Willow Hall


Please welcome Hester Fox to The Qwillery as part of the 2018 Debut Author Challenge Interviews. The Witch of Willow Hall was published on October 2, 2018 by Graydon House. 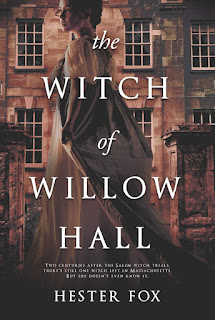 Hester:  I’ve been writing for as long as I can remember. I used to write little magazines for my pets when I was 5 or 6, but the first piece of fiction I think was a story about a mouse named Squeaky and his adventures.

Hester:  I started out as a pantser, but now that I have deadlines to meet I’ve become a plotter. I never thought that I would be able to write with an outline, but I’m finding that it gives me more freedom than I anticipated. Having a roadmap allows me to be much more creative because I don’t have to worry about what comes next or dead-ends; I can focus on the characters, the setting, and layering on historic details.

Hester:  Letting go of perfectionism and just getting the story out.

Hester:  The history and natural beauty of New England. It’s a place that lends itself to stories, and I want to tell them all.

TQ:  Describe The Witch of Willow Hall using only 5 words.

TQ:  What inspired you to write The Witch of Willow Hall?

Hester:  I was doing a museum collections internship that took me to different historic houses around New England and there was one house in particular that captured my imagination. There was something melancholy but beautiful about the old house, and the rural setting was exquisite. As soon as I saw it I knew I wanted to set a book there.

TQ:  Is The Witch of Willow Hall in the tradition of the Gothic novel? Do you have any favorite Gothic novels?

Hester:  Oh yes. I grew up on books like Wuthering Heights, Jane Eyre, and works by Austen, Dickens, Poe, and Hardy. Some of my favorite recent books are Gothic in tone and tradition, such as The Dress Lodger by Sherri Holman, The Silent Companions by Laura Purcell, and The Little Stranger by Sarah Waters.

TQ:  What sort of research did you do for The Witch of Willow Hall?

Hester:  A lot of my research was by osmosis from my education in historical archaeology, as well as from working in the museum field. Handling and studying historic objects really helped me see the world through the eyes of someone living in the 19th century.

I also started an herb garden in my yard and learned a lot about herb magic and lore. Being able to smell, feel, and in some cases even taste the herbs was a great experience; not only did it help me write about witchcraft, now I have a lovely herb garden of my own!

TQ:  Please tell us about the cover for The Witch of Willow Hall.

Hester:  The team at Harlequin did a beautiful job with the cover. It has a wonderful sense of movement and really captures the quiet magic of the main character, Lydia.

TQ:  In The Witch of Willow Hall who was the easiest character to write and why? The hardest and why?

Hester:  Since the story is told from Lydia’s point of view, she was probably the easiest to write as I was completely in her head. It was harder to write John because he keeps so much close to his chest.

TQ:  Does The Witch of Willow Hall touch on any social issues?

Hester:  The magic that Lydia employs is a direct reaction against the patriarchal society in which she lives. A lot has changed since 1821, but some of the situations in which she finds herself are all too familiar to women today.

TQ:  Which question about The Witch of Willow Hall do you wish someone would ask? Ask it and answer it!

-Where did the last name Montrose come from?

-My office window overlooks a street named Montrose and I thought it would be fitting for a Gothic family name. Later, when I was researching old Gothic novels, I learned that Sir Walter Scott wrote a book called A Legend of Montrose!

TQ:  Give us one or two of your favorite non-spoilery quotes from The Witch of Willow Hall.

When he speaks again it’s low and even. Determined. “It does matter. I’ll be back for you, Lydia. I swear it.”

And with that, he touches his heels to his horse, taking off at a canter down the road. I hardly dare to breathe as I stand there, watching his straight back and broad shoulders grow smaller and smaller until the trees swallow him up.

It’s peaceful, but in an awful, greedy sort of way. The night, the water, they want to take me. They want to swallow me up until I’m nothing more than a sigh, a forgotten secret. And I want to let them.

Hester:  My second book is another Gothic novel and is slated for release in 2019. It’s a gender-flipped Beauty and the Beast retelling set in the 1840s in coastal Maine, and features an agoraphobic widow and a reluctant minister.

​When not writing and painting, Hester works in the museum field as a collections maintenance technician. This job has taken her from historic houses to fine art museums, where she has the privilege of cleaning and caring for collections that range from paintings by old masters, to ancient artifacts, to early American furniture. She has a master’s degree in historical archaeology, as well as a background in Medieval studies and art history. Hester lives outside of Boston with her husband.