Guest Blog by Penny Pike and Review and Giveaway of Death of a Chocolate Cheater - June 5, 2015


Please welcome Penny Pike to The Qwillery. Death of a Chocolate Cheater was published on June 2nd by Obsidian. 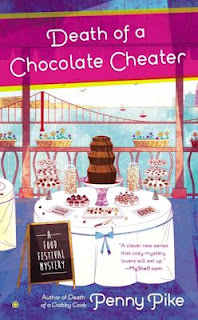 Like most readers of mystery novels—aw let’s face it, like most women on the planet—I’m a choc-addict. That’s sort of like being a crack addict but more fattening. I just introduced the drug to my five-year-old granddaughter—I gave her a Hersey’s Kiss—and now all she talks about is getting more “shock-lit.” Apparently the addiction runs in the family.
Naturally my protagonist, Darcy Burnett, featured in my mystery series, DEATH OF A CRABBY COOK and DEATH OF A CHOCOLATE CHEATER, has this same disorder. She claims she uses it for its health benefits. Chocolate is known to help alleviate depression, lower blood pressure and cardiovascular problems, relieve PMS, increase your circulatory system, boost cognitive abilities, lower cholesterol and possibly help prevent cancer. So when she’s assigned by the newspaper to write a stringer article on the upcoming San Francisco Chocolate Festival, she’s on it like melted chocolate on, well, just about anything.
Unfortunately, Darcy finds chocolates are sometimes lethal, as is the case in DEATH OF A CHOCOLATE CHEATER. Darcy and her Aunt Abby, along with hot cream puff guy Jake Miller, are serving chocolate goodies from their food trucks at the Chocolate Festival. But when one of the judges is found floating in a vat of liquid chocolate, Darcy soon discovers the judge’s death is no accident. Someone has dipped the intoxicated woman in her favorite dessert.
So how did Darcy end up in this chocolate mess? That’s the way I wrote her, of course. After all, it’s a murder mystery. While I haven’t had much experience killing people in vats of chocolate, I’ve certainly had lots of experience with chocolate—eating it, mostly. And since they say, “Write what you know,” what choice did I have?
Naturally the book contains recipes for all sorts of chocolate treats. Here are a couple to get you started.
ADVISORY: Keep chocolate handy while reading DEATH OF A CHOCOLATE CHEATER.

Cream puffs, like whoopie pies, are so versatile when it comes to mixing and matching the outsides with the fillings. This melt-in-your-mouth puff is perfect with a latte in the morning, a glass of milk in the afternoon, and a bottle of red wine in the evening.

Makes 8-10 depending on size of puff. 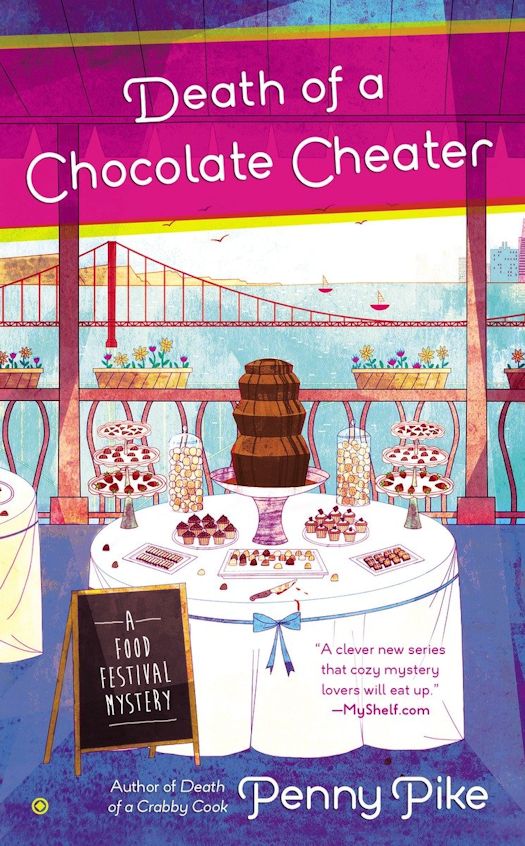 At this year’s chocolate festival, Darcy and her Aunt Abby hope to win the $10,000 prize in the chocolate contest with Aunt Abby’s taste sensation: the chocolate raspberry whoopee pie. A little friendly competition from Darcy’s sometime-beau Jake Miller, who plans to enter with his chocolate cream puff delight, only sweetens the deal. But things get sticky when one of the judges, Polly Montgomery, is taken out of commission—permanently.

The suspects include every contestant with reason to believe Polly wasn’t too sweet on their sweets, including Aunt Abby’s high school friend. Now Darcy must pick through an assortment of secrets to catch a killer before someone else gets a bittersweet finish.

The second installment of Penny Pike’s Food Festival Mystery Series is entitled Death of a Chocolate Cheater and follows Darcy Burnett, a food critic for a San Francisco newspaper, who has recently been downsized and is making ends meet while working on what she hopes will be a bestselling cookbook by working in her eccentric Aunt Abby’s comfort food truck, and living in her aunt’s Disney Land themed airstream camper. Aunt Abby has decided to enter a treat in a local chocolate festival, and has enlisted Darcy, and her son, Dillon, to help her make and serve her chocolate raspberry whoopie pies in the hopes of snagging the $10,000 prize. Unfortunately, death by chocolate becomes more than a decadent dessert, when the body of one of the judges is found floating in a massive vat of melted chocolate. When the wrong person is arrested for the crime, Darcy decides to investigate to right a wrong and keep the killer from striking again.

Darcy is still adjusting to life as a part time food service worker, but seems to take her recent troubles in stride and is able to keep a positive outlook while making plans for the future. She accepts that, while her situation isn’t ideal, she is not in a bad place and has friends and family who support her. She is not a very complex character, but is straightforward and easy to understand. Aunt Abby is absolutely delightful. She has parlayed a career working in school lunchrooms into a successful food truck business. She is cheerful and funny, always matches her makeup to her outfits, and adds a fun quirkiness to Darcy’s life. Dillon, Abby’s son and Darcy’s cousin, lives with Abby after being kicked out of college for his creative computer hacking. Dillon is technologically gifted, socially inept, a bit paranoid, in an endearing way, and good hearted. Darcy met Jake, the Dream Puff Guy, in the last novel, when he took time away from his cream puff food truck to help her solve the murder that Aunt Abby was accused of committing. He is indeed dreamy, with a hunky physique and handsome visage that has captured Darcy’s interest. He is compassionate and smart, being a lawyer in a former life, and is honest and classy. Jake and Darcy have had an obvious chemistry from the start that is explored more in this book, however, Jake’s ex-fiancée, Lyla, a picture perfect local TV reporter, makes an appearance as a foil for Darcy.

There is a large cast of characters powering the murder mystery. Reina, the coordinator of the chocolate festival, is energetic, narcissistic and single minded in her need for the festival to be a success. Reina’s reluctant sidekick is J.C., a young and hip videographer who is documenting the festival for the food network. Polly, the ill-fated contest judge was universally disliked and is only in the festival because of the hit and run death of the original judge, George, who happened to be an old flame of Aunt Abby’s. The two other judges for the competition are Isabel and Simon, both pretentious and unlikeable characters, which is undoubtedly by design. In addition to Aunt Abby and Jake, who has also entered the competition, there are multiple other contestants. Frankie is a volatile opponent, who clashes frequently with everyone, including the sassy and sexy Monet, who also happens to be Frankie’s ex-wife. Wendy is a sweet and flighty old high school friend of Abby. Harrison, who claims to have invented the chocolate waterfall product, is cocky and a bit shady, often using his model beautiful twin teenage daughters to draw in costumers. The last contestant, Griffin is young and outspoken. Each has a unique entry in the chocolate contest, along with dangerous secrets, that makes Darcy think any of them could be the murderer.

As with many cozy mysteries, the pace of the novel is slow at first, but speeds up and becomes action packed towards the end. The mystery is cleared up in a logical way and the sub-plots are tidied up for the reader. The ending is sweet, as are the recipes included in the back, inspired by the chocolate creations mentioned in the book. I will definitely be trying the award winning recipe soon. Darcy, Aunt Abby, Dillon, and Jake return in the 3rd installment of the series, Death of a Bad Apple, coming in January 2016. 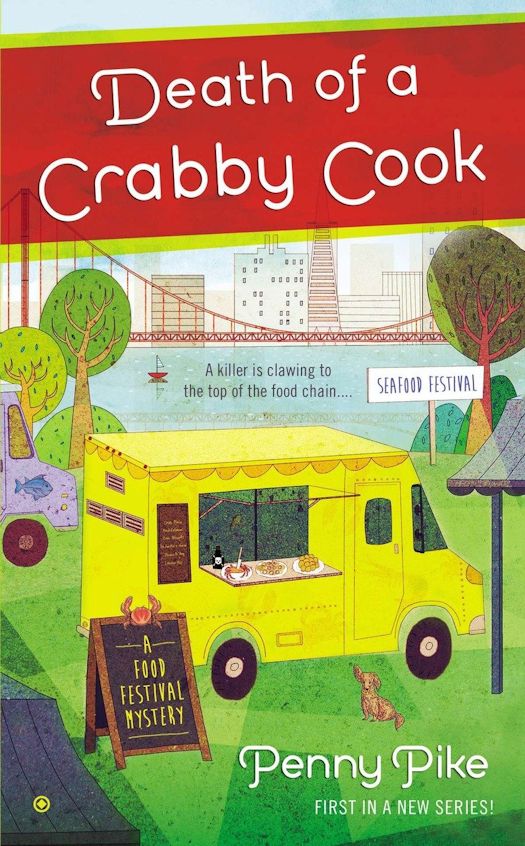 First in a new series!

At the San Francisco Seafood Festival, someone is steamed enough to kill a cook....

When restaurant reviewer Darcy Burnett gets served a pink slip from the San Francisco Chronicle, she needs to come up with an alternative recipe for success quickly. Her feisty aunt Abby owns a tricked-out school bus, which she’s converted into a hip and happening food truck, and Darcy comes aboard as a part-timer while she develops a cookbook project based on recipes from food fests in the Bay Area.

But she soon finds someone’s been trafficking in character assassination—literally—when a local chef turns up dead and her aunt is framed for the murder. The restaurant chef was an outspoken enemy of food trucks, and now Darcy wonders if one of the other vendors did him in. With her aunt’s business—and freedom—on the line, it’s up to Darcy to steer the murder investigation in the right direction and put the brakes on an out-of-control killer…. 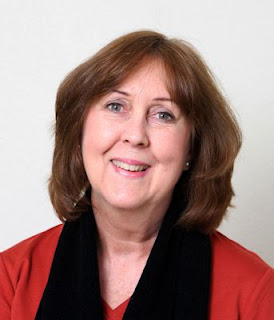 Penny Pike AKA Penny Warner is the author of the new mystery series featuring food trucks, set in San Francisco, including DEATH OF A CRABBY COOK and DEATH OF A CHOCOLATE CHEATER. The third book in the series, DEATH OF A BAD APPLE, will be out in 2016. (Obsidian/NAL/Penguin). She can be reached at www.pennywarner.com

What:  One entrant will win a Mass Market Paperback copy of Death of a Chocolate Cheater by Penny Pike from the publisher. US ONLY

Who and When:  The contest is open to all humans on the planet earth with a US mailing address. Contest ends at 11:59 PM US Eastern Time on June 14, 2015. Void where prohibited by law. No purchase necessary. You must be 18 years old or older to enter.