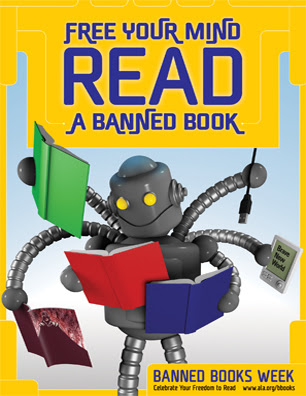 
During the last week of September every year, hundreds of libraries and bookstores around the country draw attention to the problem of censorship by mounting displays of challenged books and hosting a variety of events. The 2011 celebration of Banned Books Week will be held from September 24 through October 1. Banned Books Week is the only national celebration of the freedom to read. It was launched in 1982 in response to a sudden surge in the number of challenges to books in schools, bookstores and libraries. More than 11,000 books have been challenged since 1982. For more information on Banned Books Week, click here
According to the American Library Association, there were 348 challenges reported to the Office of Intellectual Freedom in 2010, and many more go unreported.
From the About Banned Books website: http://www.bannedbooksweek.org/about

Many books are challenged. Here is a link to the American Library Association's Books Challenged or Banned in 2010 -2011:  Books Challenged and/or Banned - 2010-2011 (PDF)  Challenged books include The Hunger Games series by Suzanne Collins, Brave New World by Aldous Huxley, and The Catcher in the Rye by J.D. Salinger. There are many more.

You can check and see if there is a Banned Books Week event near you:
http://www.bannedbooksweek.org/events

Here is a very useful map that shows challenges around the US. You can go to the larger map and then zoom in anywhere in the US, click the little balloon, and see which book was challenged and where:
http://www.bannedbooksweek.org/mappingcensorship

My thoughts are very crystallized on this subject:

As a parent and a reader I do not want anyone telling me or my children what we can or can not read.  With regard to my children, what they read is MY decision.  I would never try to stop anyone else from reading something that I did not want either of my children to read. What do you think?
Posted by Qwill at 9:41 AM