Please welcome George Mann to The Qwillery. George writes one of my favorite series - the Newbury & Hobbes Investigation series. The Immorality Engine, the 3rd book in the series, was released yesterday.

George:  I think it's probably the unusual way in which I approach my first drafts. Because of the fact I still work full time and have a family to take care of, I try to fit my writing into any and all available time I can. A lot of the dead time in my day is my commute to and from the office, and as a consequence I've taken to 'writing' the first drafts of my novels by dictating them into my mp3 player as I drive. I then type them up later, polishing it and editing the manuscript into shape as I go. It takes a lot of dedication to work that way, but I find it helps a great deal.

I also write a fair amount on my iPhone these days, using an app called 'My Writing Spot'. I've written 10,000 words of the new novel on it in the last week!

George:  Most definitely a plotter. I use file cards to sketch out scenes and then flowcharts to plan the flow of those scenes into a narrative. I take a great deal of comfort in having a skeleton to hang my story on. Although it's rarely inflexible, and changes as I write. I don't allow the outline to constrain me, but it helps me to know where I'm going, so that if I do stray down a different path, I know where I have to get back to later if I'm to get things back on track.

How does that sound?

TQ:  Without giving anything away, what is/are your favorite scene(s) in The Immorality Engine?

George:  There's two, and they're both action scenes!

The first takes place deep underground in some catacombs beneath the headquarters of an unusual cult. Veronica dons a steampunkish exoskeleton and pounds her way through the bad guys - and the walls - in an effort to save herself and Newbury from impending execution.

The second is a massive siege by an army of latter day knights, dressed in plate armour and bowler hats and riding clockwork horses while firing gatling guns and wind-up rocket launchers.

TQ:  What sort of research did you do to create the Newbury & Hobbes Investigations world?

George:  I steeped myself in Victorian and Edwardian literature, chiefly in an effort to capture the tone. I especially made a point of rereading Doctor Jekyll and Mr Hyde, War of the Worlds, lots of Sherlock Holmes and the case files of the classic occult detectives, Carnacki, John Silence, Flaxman Low. I also visited - and continue to visit - lots of Victorian properties around the UK, and read as much as I can about the history of the period - chiefly so I can work out how I want to mess it all up and play with it!

TQ:  What drew you to steampunk?

George:  I'm entranced by the notion of making a fantasy out of the past. We all do that anyway - every day - because we imagine what it must have been like to exist in the past. History, although based on everything we DO know, is nevertheless still a fantasy, a best approximation. I think with steampunk - and alternate history in general - we have the opportunity to play with that, to feed that nostalgia we feel for an age that never was or never could have been. And then, of course, there's the steampunk aesthetic, which appeals in so many ways. Who doesn't love airships?

TQ:  Do the Newbury & Hobbes Investigation series set in London and your Ghosts series set in New York City have anything common?

George:  Absolutely they do! They're very loosely set in the same fictional universe, only 25 years later and on the other side of the Atlantic. With N&H I was keen to write a very traditional steampunk series, set in a foggy Victorian London and populated with characters like Holmes, Carnacki etc. With the Ghost books I wanted to look at the world stage 25 years AFTER the steampunk revolution, to see how the political landscape had been altered. America seemed to offer the best perspective for the characters to view that world. Those books are also my love letter to New York City, my favourite city in the whole world.

TQ:  How many books are planned for the Newbury & Hobbes Investigation series?

George:  At least six. There are three more novels planned after The Immorality Engine, and I'm already well into writing the fourth, which currently bears the title The Executioner's Heart. There could be more after that, but we'll have to see. There's also a bunch of short stories and an original graphic novel in the works.

George:  Well, I have a couple more Doctor Who audio scripts to write after I've finished The Executioner's Heart, and then it's straight on to N&H #5, which is likely to be set on a massive, steampunkish sleeper train on an epic journey across Europe. Newbury - and at least two surprising people - will be onboard. After that, I have plans to write a Sherlock Holmes story featuring elements of my alternate history. Exciting times!

George:  Thanks for having me!


About The Newbury & Hobbes Investigation Series 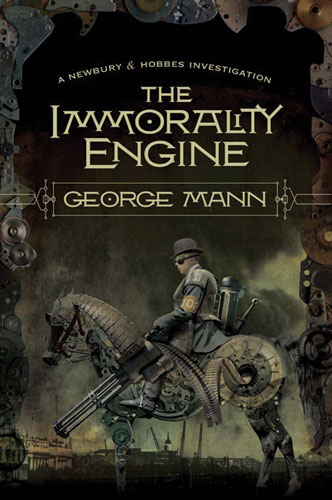 On the surface, life is going well for Victorian special agent Sir Maurice Newbury, who has brilliantly solved several nigh-impossible cases for Queen Victoria with his indomitable assistant, Miss Veronica Hobbes, by his side. But these facts haven’t stopped Newbury from succumbing increasingly frequently to his dire flirtation with the lure of opium. His addiction is fueled in part by his ill-gotten knowledge of Veronica’s secret relationship with the queen, which Newbury fears must be some kind of betrayal. Veronica, consumed by worry and care for her prophetic but physically fragile sister Amelia, has no idea that she is a catalyst for Newbury’s steadily worsening condition.

Veronica and Newbury’s dear friend Bainbridge, the Chief Investigator at Scotland Yard, tries to cover for him as much as possible, but when the body of a well known criminal turns up, Bainbridge and Veronica track Newbury down in an opium den and drag him out to help them with the case. The body is clearly, irrefutably, that of the man in question, but shortly after his body is brought to the morgue, a crime is discovered that bears all the dead man’s hallmarks. Bainbridge and Veronica fear someone is committing copycat crimes, but Newbury is not sure. Somehow, the details are too perfect for it to be the work of a copycat. But how can a dead man commit a crime? 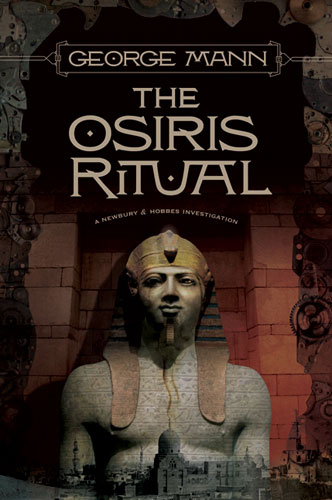 Sir Maurice Newbury, Gentleman Investigator for the Crown, imagines life will be a little quieter after his dual success in solving The Affinity Bridge affair. But he hasn’t banked on the reemergence of his villainous predecessor, Knox, who is hellbent on achieving immortality, and seems to be pursued by a secret agent who isn’t quite as he seems….

The whole affair is so baffling that Newbury is reluctant to take time away from it to attend to the mysterious murders in the wake of the unveiling of an Egyptian mummy, let alone his partner Veronica’s apparent obsession with tracking the growing pool of young women who have disappeared after being used as props in a magician’s stage act. But it’s all part of a day’s work when your boss is the queen of England.

So begins a thrilling steampunk mystery, the second in the series of Newbury & Hobbes investigations, and a grand adventure quite unlike any other. 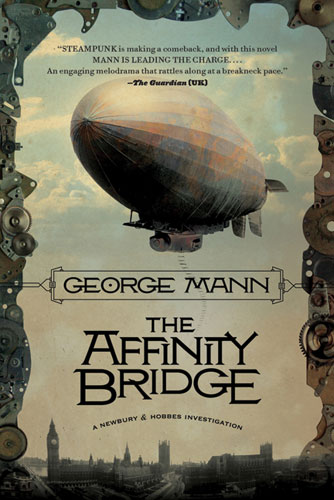 Welcome to the bizarre and dangerous world of Victorian London, a city teetering on the edge of revolution. Its people are ushering in a new era of technology, dazzled each day by unfamiliar inventions. Airships soar in the skies over the city, while ground trains rumble through the streets and clockwork automatons are programmed to carry out menial tasks in the offices of lawyers, policemen, and journalists.

But beneath this shiny veneer of progress lurks a sinister side.

Queen Victoria is kept alive by a primitive life-support system, while her agents, Sir Maurice Newbury and his delectable assistant Miss Veronica Hobbes, do battle with enemies of the crown, physical and supernatural. This time Newbury and Hobbes are called to investigate the wreckage of a crashed airship and its missing automaton pilot, while attempting to solve a string of strangulations attributed to a mysterious glowing policeman, and dealing with a zombie plague that is ravaging the slums of the capital. 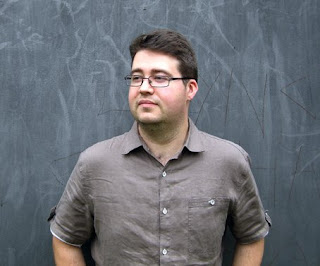 George Mann was born in Darlington, County Durham, and is the author of over ten books, as well as numerous short stories, novellas and original audio dramas.

The Affinity Bridge (Tor), the first novel in his Newbury and Hobbes Victorian fantasy series, was published in 2008. Other titles in the series include The Osiris Ritual (Tor) and The Immorality Engine (Tor).

His other novels include Ghosts of Manhattan (Pyr) and Ghosts of War (Pyr), mystery novels about a vigilante set in a post-steampunk 1920s New York.

His most recent novels are Doctor Who: Paradox Lost (BBC Books), featuring the Eleventh Doctor alongside his companions, Amy and Rory and The Immorality Engine (Tor), the latest of his Newbury & Hobbes adventures.

What:  One commenter will win a copy of The Immorality Engine (US version) generously provided by Tor US. 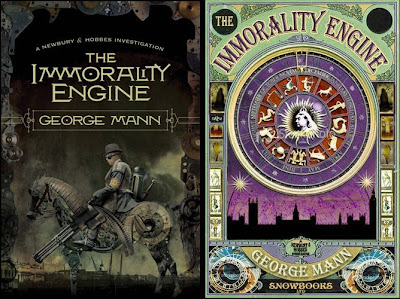 Who and When: The contest is open to all humans on the planet earth with a mailing address. Contest ends at 11:59pm US Eastern Time on Wednesday, October 5, 2011. Void where prohibited by law. You must be 18 years old or older to enter.


*Giveaway rules are subject to change.*
Posted by Qwill at 8:41 AM