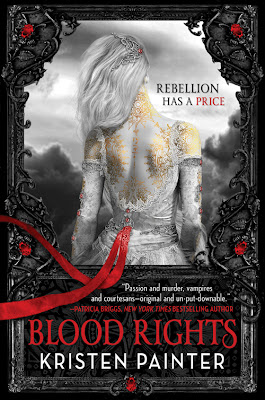 Born into a life of secrets and service, Chrysabelle's body bears the telltale marks of a comarré -- a special race of humans bred to feed vampire nobility. When her patron is murdered, she becomes the prime suspect, which sends her running into the mortal world...and into the arms of Malkolm, an outcast vampire cursed to kill every being from whom he drinks.

Now, Chrysabelle and Malkolm must work together to stop a plot to merge the mortal and supernatural worlds. If they fail, a chaos unlike anything anyone has ever seen will threaten to reign.

Blood Rights is the first book in the House of Comarré series. The Comarré are bred to be the most pure blood sources for noble vampires. As such they are highly valued. Blood Rights centers on Chrysabelle and the events that occur after the murder of her blood rights owner, Lord Algernon. Chrysabelle flees to her aunt in Paradise City, New Florida. She’s put in touch with Mal, a vampire who is considered anathema by vampire society.

Blood Rights is a terrific book. I’ve read many stories where the supernatural exists alongside of an unknowing humankind. This is one of my favorites. The world building is just so good – the mysterious House of Comarré, the machinations of the noble vampires, the world of vampires and beings outside the mainstream. There were little things I really enjoyed as well. For example, the names of the five houses of noble vampires delighted me. Against the backdrop of this wonderfully created world is a truly absorbing mystery. Who killed Lord Algernon and why?

Kristen Painter has not only created a fantastic world but has filled it with well-crafted characters, both primary and secondary. Chrysabelle and Mal are great foils for each other. The tension between them is well set up. The characters are multidimensional, even the truly horrific villain. The pacing of the Blood Rights is spot-on from beginning to end.

Blood Rights is one of those books that is a sheer joy to read. It features exceptional world building, fascinating characters, and a captivating story. I'm thankful that the second book in the series is out in November and the third book in December.

I give Blood Rights 5 Qwills.