Interview with David Bowles, author of The Blue-Spangled Blue

Please welcome David Bowles to The Qwillery as part of the 2021 Debut Author Challenge Interviews. The Blue-Spangled Blue, David's adult SF Debut, was published on March 11, 2021 by Castle Bridge Media. 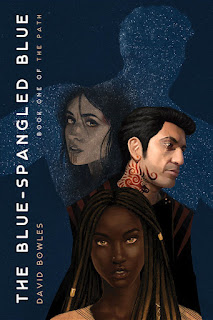 TQ:  Welcome to The Qwillery. What is the first fiction piece you remember writing?
David:  I still have it in the “baby book” my mother kept until I was seven—a bit of “microfiction” I wrote in first grade about a boy standing on the beach with an ice cream cone in his hand. A wave decides to snatch it from him.
TQ:  Are you a plotter, a pantser or a hybrid?
David:  A plotter for sure. Characters begin to make their own decisions and change some of the particulars, but I can’t write if I don’t have the basic story outlined.
TQ:  What is the most challenging thing for you about writing?
David:  Focusing on one particular book at a time. I have tons of ideas and dream projects.
TQ:  What has influenced / influences your writing?
David:  The storytelling practices of my Mexican American family, especially the sorts of folktales I heard as a child, as they intersect with my own identity and passions.
TQ:  Describe The Blue-Spangled Blue using only 5 words.
David:  Action-packed religiopolitical BIPOC futurist romance
TQ:  Tell us something about The Blue-Spangled Blue that is not found in the book description.
David:  Many of the characters are queer, either in sexuality or in gender. In fact, the planet Jitsu waits until children are 10 before considering affirming a gender for them, and those who don’t feel either female or male are considered “omedeyo” or “twin-selved” (a term like our present “non-binary” or “two-spirit”).
TQ:  What inspired you to write The Blue-Spangled Blue?
David:  After getting married, I lived with my wife’s family in Mexico for a while. The particular dynamics of her evangelical Mexican family, her sister’s neurodiversity, and her drive to give everyone in her community a better life got me to thinking about what such a struggle might look like on an interstellar scale. Over time, those reflections have led me to speculate about what it will take for humanity to pull away from its present struggle for power and wealth, moving down a different collective path.
TQ:  What sort of research did you do for The Blue-Spangled Blue?
David:  Over two decades, I have crafted two very important elements of the novel: the “religion” known as The Path (or Neo Gnosticism) and the language Baryogo (I’m also a linguist, full disclosure). That required considerable study, as did developing the cultures of the Aknawajin (an ethnic group that arises in the asteroid belt, a blend of Indigenous Mesoamerican, African, and East/Southeast Asian peoples) and of the Simerianes (a branch of Latinx people that emerges in the Cimmeria region of Mars).
TQ:  Please tell us about the cover for The Blue-Spangled Blue.
David:  The cover art was created by Estudio Tlalli, an activist non-profit dedicated to protecting land and community created by my two daughters (a tattoo artist and illustrator, respectively). It pictures the two contrasting couples in the book: Tenshi Koroma (foreground) and Brando D’Angelo (silhouette) – Konrau Beserra and Jeini Andrade (midground).
TQ:  In The Blue-Spangled Blue who was the easiest character to write and why? The hardest and why?
David:  The easiest was Brando D’Angelo, because his personality is essentially a fictional extension of my 25-year-old past self. The hardest was (and continues to be) Samanei Koroma, Tenshi’s sister, because she is a powerful neurodiverse antagonist, and I have to constantly check whether I’m falling into stereotypes about people with dissociative identity disorder and schizophrenia.
TQ:  Does The Blue-Spangled Blue touch on any social issues?
David:  Yes, very much so. It depicts humanity as having moved past white hegemony (the global majority—BIPOC people—are the ones who have colonized space), but still shackled by corporate capitalism and a will toward power. Religious fundamentalism, queer identity, and future spirituality are all explored as the series speculates as to how we might escape what seems an inevitable, tragic end as a species.
TQ:  Which question about The Blue-Spangled Blue do you wish someone would ask? Ask it and answer it!
David:  Does it have bad-ass action scenes and space battles? Absolutely! What would a space opera be without them?
TQ:  Give us one or two of your favorite non-spoilery quotes from The Blue-Spangled Blue.
David:
Tenshi to Brando: “Don’t imagine we need you or any other offworlder to be our savior. We can save ourselves just fine. You’ve come to teach, but you also need to learn. Instead of you being the hero and changing this world, maybe it will end up changing you.”
The Ramatini to Brando: “You don’t have a soul. You have a self. But you didn’t create that self. It has accrued together over time, coalescing out of bits from the world around, expectations imposed on you, teachings you’ve received, experiences you’ve had. The second Oracle taught us to shatter those selves and build bricolage souls from the pieces.”
TQ:  What's next?
David:  Books 2 and 3 of THE PATH drop in July and November of this year. My Indigenous magic / steampunk graphic novel series Clockwork Curandera launches in October with The Witch Owl Parliament. In the midst of all that, Penguin Random House will be publishing my debut children’s book this summer, My Two Border Towns.
TQ:  Thank you for joining us at The Qwillery!
The Blue-Spangled Blue
The Path 1
Castle Bridge Media, March x, 2021
Trade Paperback and Kindle eBook, 690 pages 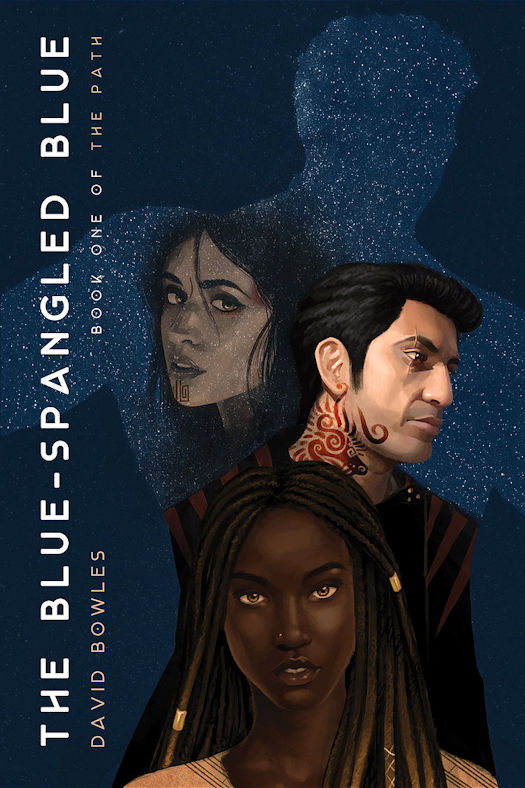 Jitsu. Once the center of human expansion into distant space, this world was isolated for the better part of a century, a theocratic government rising to fill the void left by its former corporate owners. Now, as Jitsu begins to open itself to the rest of humanity, Brando D’Angelo di Makomo accepts a teaching position on the arid planet. He finds himself drawn to controversial architect Tenshi Koroma and her religious reform movement. As he learns more about Tenshi's faith—The Path—Brando decides to accept its tenets, to shatter his identity and rebuild himself so that he can be worthy of a soul.
But the dogmatic struggles on Jitsu are a mask for the machinations of a diabolical mind, and the professor’s life will be forever altered by the cruelty of Tenshi’s enemies.
In the aftermath, Brando will find a deadly new Way along The Path.
And his steps will echo throughout history. 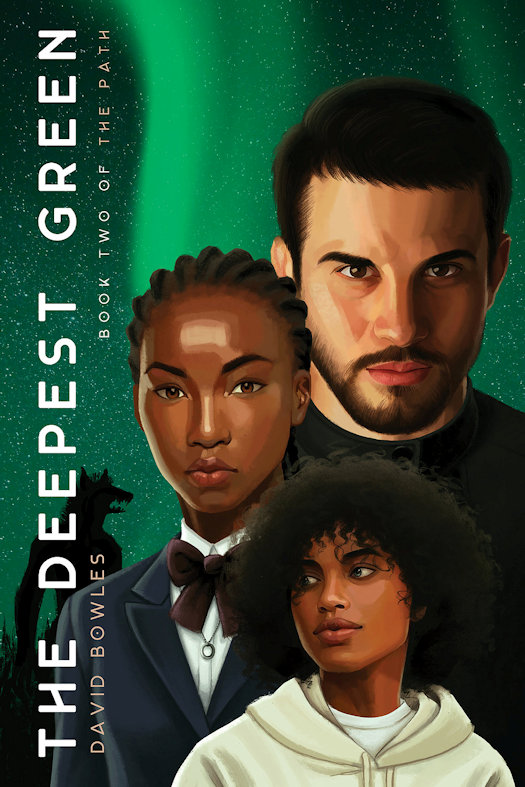 Twins Teri and Miwa Miranda are happy and popular high school students on the independent world of Terego. Their family is beloved by the community: their sweet half-brother Jakobo, caring stepmother Rhea, and doting father Nando, a model citizen in all aspects of his life.
But every bit of that life is a lie.
In reality, Nando Miranda is Brando D'Angelo, a wanted fugitive, raising the clones of his murdered wife and daughter, hoping he won't be discovered.
Now the armed forces of the Consortium have finally tracked him down. In an instant his carefully constructed identity is exploded, and the true nature of his daughters is revealed.
The devastated teens have little time to assimilate the news. Retreating from their community in shock, they find themselves abducted, drawn into a cataclysmic crisis that will shake the foundations of human society.
For humans are not the only species on Terego. In the deep green shadows of its impenetrable forests, fierce creatures are rallying for war.
And an ancient intelligence is awakening from its slumber.

About David
David Bowles is a Mexican American author and translator from south Texas. Among his many award-winning titles are Feathered Serpent, Dark Heart of Sky: Myths of Mexico; The Smoking Mirror, and They Call Me Güero. His work has been published in multiple anthologies, plus venues such as The New York Times, Strange Horizons, Apex Magazine, The Dark, Latin American Literature Today, School Library Journal, Rattle, Translation Review, and the Journal of Children’s Literature. Additionally, David has worked on several TV/film projects, including Victor and Valentino (Cartoon Network), the Moctezuma & Cortés miniseries (Amazon/Amblin) and Monsters and Mysteries in America (Discovery). Learn more at www.davidbowles.us and follow him on Twitter @DavidOBowles
Posted by Qwill at 9:00 AM