Interview with Elisabeth Naughton, author of the Eternal Guardians series, and Giveaway - November 2, 2012

Please welcome Elisabeth Naughton to The Qwillery. Enslaved, the 5th book in the Eternal Guardians series, will be published on November 6, 2012. 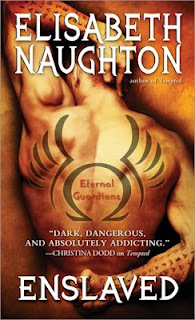 Elisabeth:  Thanks so much for having me!

Elisabeth:  Hm…a tough question right off the bat. I think it would be that I have to win at solitaire on my phone before I can start writing. I know, it’s a stupid quirk, but if I can’t win at least once, I can’t write.

Elisabeth:  Both. My CPs call me a plantster who “plots into the mist”. When I start a book I know the inciting incident, the black moment and the resolution. Everything else is a blur. I usually plot about three chapters, pause, squint into the mist, plot another three and repeat until I get to the black moment. Drives my CP NUTS!

Elisabeth:  Time management. I’m a procrastinator by nature so if you give me six months to write a book I’ll wait until three have passed before I start. This makes for a lot of stress for me and my family. I’m trying to be better about this but change is never easy.


TQ:  What inspired you to write the Eternal Guardians series?

Elisabeth:   The idea for the Eternal Guardians came while I was writing STOLEN FURY, my debut book. STOLEN FURY is a romantic suspense treasure hunt where the main characters are searching for three ancient Greek relics. I knew during research for that book that I wanted to write a series based on Greek mythology, I just didn’t know what. At the same time I had an idea for a book about a woman who doesn’t know she’s was born into royalty and a warrior who has to bring her back to his world knowing doing so will fulfill a prophecy that could kill her. When I was reading a book blog and someone commented that they wished an author would write a series about the Greek heroes, the research and the book idea melded and the result was the Eternal Guardians.


TQ:  What sort of research did you do to create your world and mythology?

Elisabeth:  I spend a lot of time researching Greek myths and stories. The world building comes from that, combined with my own active imagination. I do draw ideas from movies, but I try not to read other paranormal romances when I’m working on a series because I don’t want to be influenced by what other authors are doing.

As for the myths…I try to stay as close to the ancient myths as possible, but for every account that says a story happened one way, you can find another that says it happened in a slightly different way. That makes it easy for me to twists myths around to fit my characters – it also makes it fun.

Elisabeth:  A haunted warrior with nothing to lose. A woman who will test every bit of control he has left. A journey that could kill them both.


TQ:  Without giving anything away, what is/are your favorite scene(s) in Enslaved?

Elisabeth:  This question is so hard to answer without giving too much away!

My favorite scene in the book comes about halfway through. Gryphon thinks he’s done something completely awful to Maelea. His memories are sketchy, but when he wakes in the morning he’s riddled with guilt. There’s a scene between the two of them where he’s trying to apologize—although knows he can never make up for what he did—and Maelea’s looking at him like he’s nuts. What follows is a major turning point in their relationship that makes me smile every time I think about it.


TQ:  In the Eternal Guardian series, who was the most difficult character to write and why? The easiest and why?

The hardest hero to date was probably Demetrius. He was just so…mean. It was really hard to stay true to his character when I wanted to slap him upside the head. He’s still hard to write because he will always be abrasive to everyone but Isadora. Even though he has his HEA, he doesn’t believe it’s real yet. And there’s always that fear that he still doesn’t deserve it.

The easiest character to write is Casey. I think because I identify with her the most. When I was writing MARKED, I put myself in her shoes – how would I feel if I was suddenly told gods and heroes and daemons were real? It was easy to write her because it was easy to envision my own reactions.


TQ:   Which character has surprised you the most?

Elisabeth:  Isadora. Her character has gone through the biggest transformation, I think. She went from being meek and afraid to strong and confident. Her story isn’t over yet either. I have more in store for her and Demetrius and Nick, and I expect her to continue to surprise me.

Elisabeth:  Right now I’m working on Eternal Guardians book 6, which is Titus’s book (tentatively titled SCORCHED). It’s set to release in March 2013. After that I’ll move to Nick’s book – lots in store for that one, so stayed tuned! I also recently sold a new romantic suspense series to Montlake romance which I’m super excited about. No idea on release dates yet, but I’m excited to write RS again and am pretty sure readers who enjoyed my Stolen books will like these as well.

Elisabeth:  Thanks so much for having me. Happy reading to everyone and I hope you enjoy ENSLAVED!

About the Eternal Guardians 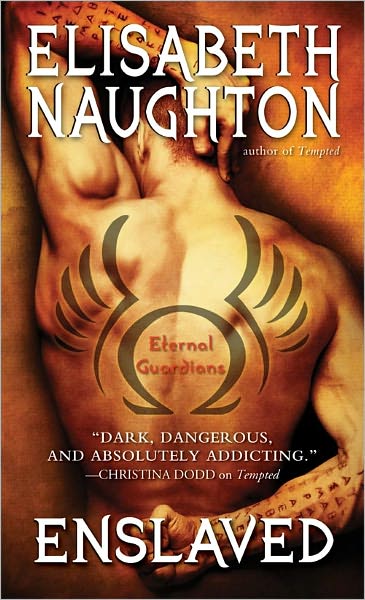 GRYPHON—Honorable, loyal, dependable…tainted. He was the ultimate warrior before imprisonment in the Underworld changed him in ways he can't ignore.

She calls to him. Come to me. You can't resist. But Gryphon will not allow himself to be ruled by the insidious whispers in his head. And there's only one way to stop them: kill Atalanta, the goddess who enslaved him. But with so much darkness inside, he can't be sure what's real anymore. Even the Eternal Guardians, those who protect the human realms and the gods, want to exile him.

Finding Malea is like a miracle. Somehow he doesn't feel the pull of the dark when she's near. And he's determined to keep her as near as possible, whether she wants him close or not. But she's a temptation that will test every bit of control he has left. One that may ultimately have the power to send him back to the Underworld...or free him from his chains for good. 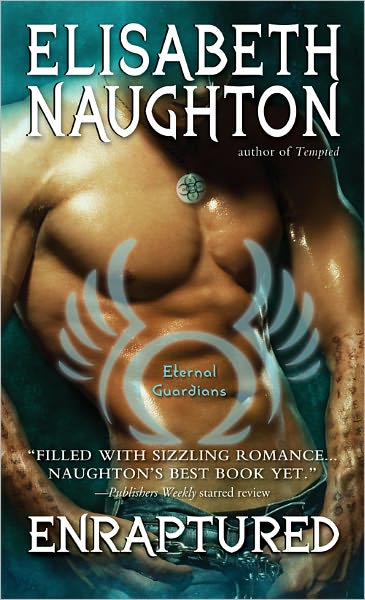 ORPHEUS—To most he's an enigma, a devil-may-care rogue who does whatever he pleases whenever he wants. Now this loose cannon is part of the Eternal Guardians—elite warriors assigned to protect the human realm—whether he likes it or not.

Orpheus has just one goal: to rescue his brother from the Underworld. He's not expecting a woman to get in the way. Especially not a Siren as gorgeous as Skyla. He has no idea she's an assassin sent by Zeus to seduce, entrap, and ultimately destroy him.

Yet Skyla herself might have the most to lose. There's a reason Orpheus feels so familiar to her, a reason her body seems to crave him. Perhaps he's not the man everyone thinks... The truth could reveal a deadly secret as old as the Eternal Guardians themselves. 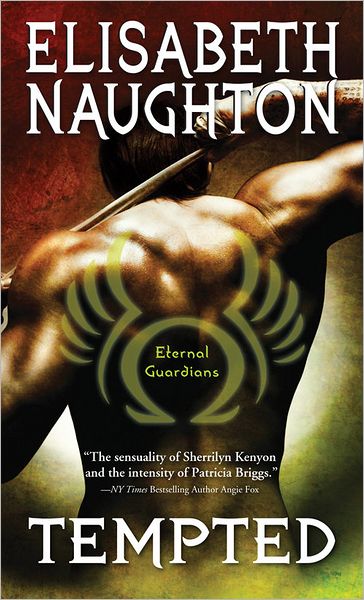 DEMETRIUS—He's the hulking, brooding warrior even his fellow Guardians avoid. Too dark. Too damaged. And given his heritage, he knows it's best to keep everyone at arm's length.

Isadora is missing. The words pound through his head like a frantic drumbeat. For her own protection, Demetrius did all he could to avoid the fragile princess, his soul mate. And now she's gone—kidnapped. To get her back, he'll have to go to the black place in his soul he's always shunned.

As daemons ravage the human realm and his loyalty to the Guardians is put to the ultimate test, Demetrius realizes that Isadora is stronger than anyone thought.

And finally letting her into his heart may be the only way to save them both. 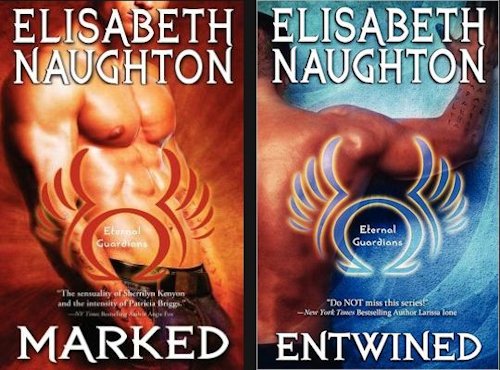 A former junior high science teacher, Elisabeth Naughton traded in her red pen and test-tube set for a laptop and research books. She now writes sexy romantic adventure and paranormal novels full-time from Oregon, where she lives with her husband and three children. Her work has been nominated for numerous awards, including the RWA RITA© Award, the NJ RWA Golden Leaf, and the RWA Golden Heart. When not writing, Elisabeth can be found running, hanging out at the ball park, or dreaming up new and adventures. Visit her at www.elisabethnaughton.com and follow her on Twitter, @ElisNaughton.

What:  One commenter will win a copy of Enslaved (Eternal Guardians 5) from Sourcebooks. US and Canda ONLY


Which Greek God, Goddess, Demi-God or Goddess would you like to meet?

Who and When:  The contest is open to all humans on the planet earth with a US or Canadian  mailing address. Contest ends at 11:59pm US Eastern Time on Friday, November 9, 2012. Void where prohibited by law. No purchase necessary. You must be 18 years old or older to enter.


*Giveaway rules are subject to change.*
Posted by Qwill at 11:18 AM