Christine:  I’m not terribly quirky in that area of my life, but I used to have one sort of…different…habit. I would pick out a token for each book I started, something to represent a character or the “vibe” of the story. For instance, I wrote one book that featured a glass castle, so I bought a small Swarovski crystal castle to look at for inspiration. There was another early book in which my heroine had a bit of a whimsical personality—she liked fairies and things like that, so I had a fairy figurine. That quirk went by the wayside, though.

Christine:  So many to choose from! I’ve always been an eclectic reader—by the fifth grade, I was reading everything from romances to TO KILL A MOCKINGBIRD to John Saul and Stephen King and VC Andrews. Quite the variety, and they all influenced my writing one way or another. I loved to be creeped out (Saul and King) and VC Andrews had such a sense of gothic, warped, romantic, over-the-top drama and horror that really inspired me. Nowadays, I’d say my favorite books are THE SECRET HISTORY by Donna Tartt and THE STAND by Stephen King. I’m currently becoming very obsessed with George R.R. Martin’s “A Song of Ice and Fire” series, though.

TQ:  Are you a plotter or a pantster?

Christine:  Again, my eclectic personality will come into play here… I’m both, LOL. Weirdly, when I write my romances, I’m very much a plotter. Then again, I sell those books by providing detailed outlines and sample chapters, so plotting is a necessity. With the urban fantasy and supernatural stories like BLOODLANDS, I’m more of a pantster. I have a basic outline, but I tend to flesh things out more while I’m writing those. I use the “sticky note” method, which basically means that I have a closet door full of little yellow scenes that I can move around as needed.

TQ:  What inspired you to write the Bloodlands series?

Christine:  I was on a classic Western movie binge and, like most writers, my mind started to go strange places. I wondered what might’ve happened if Shane had been a vampire, LOL. (I always tell people that the first BLOODLANDS book is a paranormal SHANE meets MAD MAX.) Then I started to have some fun while putting supernatural, postapocalyptic twists on all those classic Western tropes—the “drifter/gunslinger who’s looking for redemption/his humanity”; the “helpless pioneers who gain strength” from the lessons this drifter teaches them; the “cruel rancher” nearby whose property is populated with thugs. In books 2 and 3 (BLOOD RULES, IN BLOOD WE TRUST), there are many other opportunities to spin those tropes. I especially loved developing the “fallen scarlet woman” and the “mysterious woman with a tragic disease” characters. One of the original characters even becomes the “stalwart sheriff.”

TQ:  The Bloodlands series is post-apocalyptic, western, and fantasy. How difficult (or easy) was it to blend the genres?

Christine:  Very easy. That’s just how the story was. And we all know that once we have an idea that makes us want to write, everything flows from there. The tough thing about writing BLOODLANDS had more to do with paying attention to gaping plot holes, etc., because there’s a mystery that holds the first book together. I studied one particular book of Agatha Christie’s to see how she pulled off a certain “trick.” I can’t tell you right now what that trick is (You’ll know by the end of BLOODLANDS.) or which book I studied—that would be a dead giveaway—but I’ll tell everyone the title after BLOODLANDS has been out for a bit. I hate to be coy, but I hate spoilers even more, LOL.

TQ:  Without giving anything away, what is/are your favorite scene(s) in Bloodlands (Book 1)?

Christine:  I had a lot of fun with two scenes in particular. The first is a scene that involves the “cruel rancher” showing the “settlers” just how far he’ll go to keep his men safe. (Actually, one of my favorite characters is the villain, Johnson Stamp. I tried not to make him a clichéd “bad guy,” so he’s got a lot of motivation for everything he does, no matter how terrible he seems.) The second scene involves a “high midnight” showdown near the end of the book. I have a lot of fun writing action scenes, especially if it’s set in a place that’s eerie, with postapocalyptic things like “loom trees” casting shadows in the moonlight.

TQ:  In Bloodlands (Book 1), who was the most difficult character to write and why? The easiest and why?

Christine:  The most difficult—and most rewarding—character to write was Mariah, the heroine. She’s been traumatized in the past, so it was a challenge to avoid having her come off like major victim. She’s also a shady character, and rather prickly, really lacking in trust, and I had to pay attention to what I did with her in those respects. But she has a character arc that I loved developing over the course of the trilogy.
The easiest was a secondary character who’s called the oldster. He came out of a classic Western trope, too—the crusty, slightly loony, whiskered old guy who’d be John Wayne’s deputy in a sad, small town. He’s one of those characters who had a voice that went straight from my mind to the keyboard.

TQ:  What sort of research did you do to create the Bloodlands world?

Christine:  My biggest source of inspiration came from the New Yorker magazine, believe it or not. They have fantastic science articles in there that served as springboards for more research on ideas like mutations. I read Thomas Friedman, who has very firm ideas about globalization and the future of our country. I read about survivalists and what they’re doing in order to function away from “civilization.” Oh, and the History Channel, too—you can apply how societies organized themselves in the past to the future. (Yes, I’m being vague there, but let’s just say there’ll be a sort of “town of the dead” making an appearance after book 1.)

Christine:  They called it the New Badlands...until the vampire came, bringing danger to the settlers who took him. Then it became the Bloodlands.

TQ:  How many books are planned for the Bloodlands series?

Christine:  There are three coming out back-to-back-to-back starting July 27.

Christine:  I’ll be writing quite a few of my Crystal Green books, but I also have a new Christine Cody project in the works—a paranormal epic fantasy. To be more specific, if you crossed LORD OF THE RINGS with vampires and SPARTACUS: BLOOD AND SAND, you’d get something like this “secret project.” I’m also looking at the opportunities in self e-pubbing because there’s so much out there to explore.

Christine:  Thank you so much! 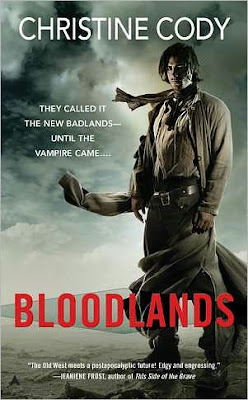 It was called the New Badlands, home to the survivors of a cataclysm that altered the entire nation. Then the vampires arrived, and it was rechristened the Bloodlands. Not because of the vampire, but because of the gun-for-hire who'd decided to slay every monster in the country by any and every means necessary. 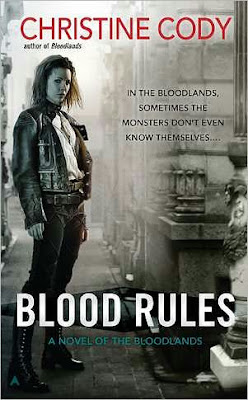 After the man named Gabriel came to the Bloodlands, Mariah Lyander was forced to face her true nature, and the horrible things she had done. To redeem herself, she embarks on a quest to find a rumored cure for her were-creatures hoping to recover her own humanity-and Gabriel's love. 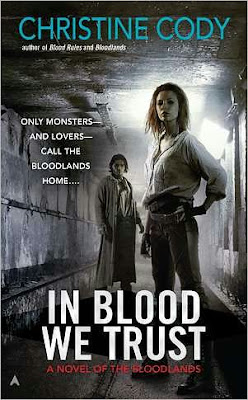 They are monsters: Mariah, the reluctant rebel who has become a god to others of her kind, and Gabriel, the vampire, who loves her at his own peril.

They have returned to the Bloodlands, where their story began-to face the horrors of Mariah's past and the uncertainties of Gabriel's future- and to make a final stand, for their lives-and their love. 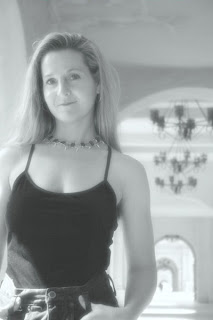 Christine Cody is the author of the urban fantasy Vampire Babylon (written as Chris Marie Green) and Bloodlands series from Ace Books. Until about eight years ago, she was an eighth-grade teacher, but she became a full-time author who has published over thirty-five books under this name as well as the pseudonym Crystal Green.

What:  One commenter will win a signed set of all six Mass Market Paperback novels of the Vampire Babylon series (written as Chris Marie Green) from Christine. USA mailing addresses only. 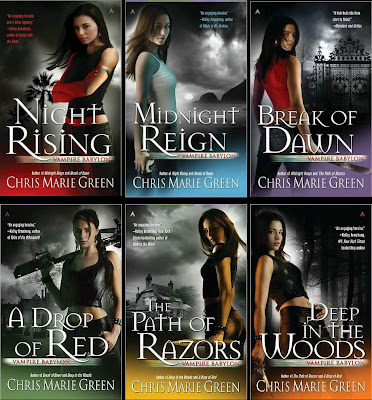 Information about the Vampire Babylon series may by found by clicking here.


What is your favorite western or post-apocalyptic book or movie?
Please remember - if you don't answer the question your entry will not be counted.

Who and When: The contest is open to all humans with a USA mailing address. Contest ends at 11:59pm US Eastern Time on Wednesday, July 20, 2011. Void where prohibited by law.


*Giveaway rules are subject to change.*
Posted by Qwill at 8:06 AM