Cover A - Art by Geof Darrow 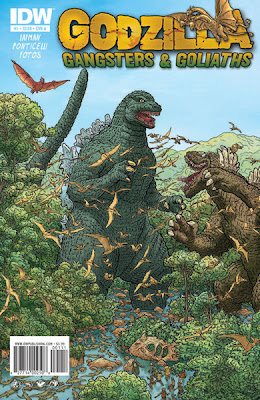 Detective Makoto Sato is on an unrelenting quest to bring down the Takahashi crime syndicate. Sato's efforts earn him a one-way trip to a tropical getaway, courtesy of the Tokyo criminal underworld. The exotic locale? MONSTER ISLAND! Alone and facing death at the hands of both gangsters and goliaths, Sato must use his wits to survive—and enlist the aid of some most unusual friends. Join superstar creators John Layman (Chew) and Alberto Ponticelli (Unknown Soldier) for this unusual and exciting miniseries! IDW Publishing

My first thought was that the comic could have been called Gojira: Yakuza & Kaiju, but that's probably a bit esoteric or silly... or both.  Moving on to what I think about the comic? It's really terrific. There's an interesting story - Detective Sato's fight against the Takahashi crime syndicate. Add Monster Island and Godzilla and other 'goliaths' and you've got more than just a typical monster stomps major city story. Godzilla: Gangsters & Goliaths has much less humor than the Godzilla: Kingdom of Monsters series, which is also published by IDW. I prefer my Godzilla with less humor. The movies (with the unintentional exception of the US cut of Godzilla (1954)) are not comedies.

The artwork by Alberto Ponticelli excellent. I really enjoyed John Laymon's writing in Issue 1. This is a promising addition to Godzilla comics. I'm looking forward to seeing where Laymon and Ponticelli take the story.


Cover B - Art by Alberto Ponticelli 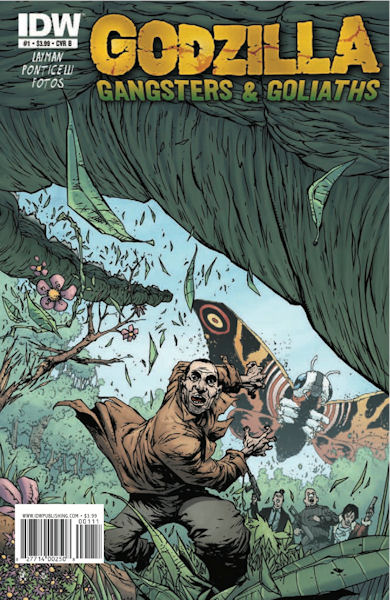 There is also a Retail Incentive cover which is a B&W version Cover A. In addition there is a Convention Cover with art by Matt Frank.

IDW notes that "This story takes place in a different continuity than Godzilla: Kingdom of Monsters."
Posted by Qwill at 5:50 PM