Jesse:  I'm not sure I have any interesting writing quirks. Maybe it's just not something I can identify in myself since I have my system and it works for me. I'm sure if someone came in to my office and looked at me write for 24 hours they'd figure I was a big weirdo. :)

Jesse:  It's hard for me to name a favorites since I read very widely and it's all dependent on mood. I'm probably more influenced by zombie movies and TV shows since Dave and Sarah use their own knowledge of those kinds of things in order to survive the apocalypse.

Jesse:  I'm a plotter, though I pantsed my way through MARRIED WITH ZOMBIES because I originally wrote it just to entertain myself. But I am, by nature, a planner and I continue to plan my books since then.

TQ:  What inspired you to write the Living With The Dead series?

Jesse:  My husband and I went with some friends to see "Zombieland" and late that night I kept having this very clear picture of Dave and Sarah going to their therapist's office and discovering she had been turned into a zombie and then having to use her marital advice to escape the zombie apocalypse. And hence, MARRIED WITH ZOMBIES was born.

TQ:  Who would play Sarah and David in a movie of the books?

Jesse:  I think Nathan Fillion for Dave. Sarah is harder. I still like Alyson Hannigan (from "How I Met Your Mother" and "Buffy" , but thusfar no one from Hollywood is making a movie of it. Maybe some day.

TQ:  Describe Shambling With The Dead in 140 characters or less.

Jesse:  TV Producer Avery puts together telethons after tragedies, but the Zombie Outbreak isn't your average tragedy. And then the zombies come.

TQ:  Without giving anything away, what is/are your favorite scene(s) in the Shambling With The Dead?

Jesse:  It's a short story, so there aren't really scenes. I do like when the Ryan Seacrest type host gets it, though.

TQ:  In your Living With The Dead series, who was the easiest character to write and why? Hardest and why?

Jesse:  As a writer, I'm very lucky that both Dave and Sarah were really easy to write, they felt very real to me. I guess The Kid in Book 2 was a little harder since I don't have kids, myself and my nephews are much younger than him.

TQ:  How many books, novellas, etc. are planned for the Living With The Dead series?

Jesse:  My publisher doesn't want any more Living With the Dead books, but now that I'm self-publishing the limits are sort of dropped. The last book is officially EAT SLAY LOVE out in July, but I'll be putting out a short story collection set in the same universe. It's called IN THE DEAD and will be out in August (you can't pre-order indie pubbed books, but it will be up the last week of July). And there may be room for more Living With the Dead books and other zombie stories in the future.

Jesse:  My upcoming releases are EAT SLAY LOVE (July), IN THE DEAD: Volume 1 (August) and I'm planning another IN THE DEAD volume probably late 2011 or early 2012 as long as the first one sells well and I feel there's still demand for it. I'm also working on some other projects for 2012. The best place to follow what's coming when is my website: http://www.jessepetersen.net/ , my Facebook: http://www.facebook.com/#!/pages/Jesse-Petersen/246153580904 and my Twitter where you can follow me @jessepet. I update there very regularly.

Jesse:  Thanks so much for having me!

Married with Zombies
Living With The Dead 1
(Orbit, September 1, 2010) 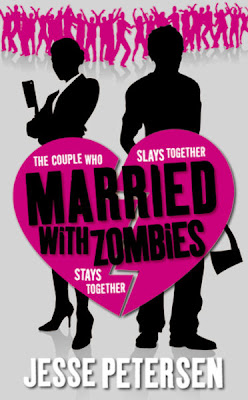 A heartwarming tale of terror in the middle of the zombie apocalypse.

Once upon a time they met and fell in love. But now they're on the verge of divorce and going to couples' counseling. On a routine trip to their counselor, they notice a few odd things - the lack of cars on the highway, the missing security guard, and the fact that their counselor, Dr. Kelly, is ripping out her previous client's throat.

Now, Sarah and David are fighting for survival in the middle of the zombie apocalypse. But, just because there are zombies, doesn't mean your other problems go away. If the zombies don't eat their brains, they might just kill each other. 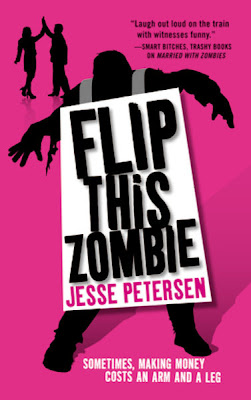 The Zombie Apocalypse has been good to Sarah and David. Their marriage is better than ever. They communicate well, share responsibilities, and now, they're starting a business. ZombieBusters-for all your zombie extermination needs.

There are lots of zombies and that means lots of customers...Except one of them doesn't want the zombies dead, he wants them alive and ready for experimentation. Mad scientists make for difficult clients and this time, Sarah and David might have bitten off more than they can chew.

Shambling with the Stars
A Living With The Dead Short Story
(Orbit, June 15, 2011) 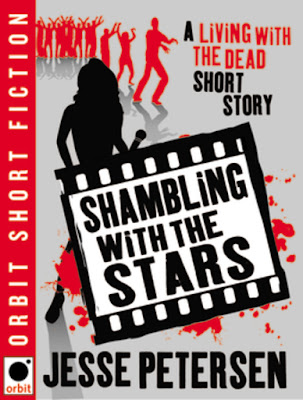 Avery Andrews is her name and directing celebrity telethons after tragedies is her game. But the Northwestern Zombie Outbreak isn't your average tragedy... and once the infection spreads to the studio, Avery and her crew will have to worry about staying alive, not ratings. 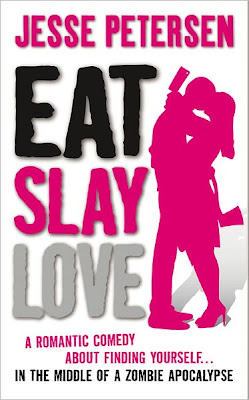 Sarah and David have survived the zombie apocalypse. They stood side by side and fought the undead, mad scientists, and even bionic monsters until the unthinkable happened. A zombie bite. But not even that could stop them. Now, with a possible cure in hand, they're headed east, looking for a safe zone behind the rumored "Wall." They're feeling pretty optimistic.

That is until Dave stops sleeping and starts lifting huge objects.

Because they haven't got a prayer.

A Facebook quiz once told Jesse that she would only last a few weeks in a zombie apocalypse. She does not believe this because she's a good shot and has an aversion to bodily fluids. She currently lives in the Midwest with her hero husband (who is also a good shot) and two cats (who cannot be trusted).


What weapon would you have to have during a zombie apocalypse?
Please remember - if you don't answer the question your entry will not be counted.

Who and When:  The contest is open to all humans on the planet earth with a mailing address. Contest ends at 11:59pm US Eastern Time on Wednesday, June 22, 2011. Void where prohibited by law.


*Giveaway rules are subject to change.*
Posted by Qwill at 8:56 AM