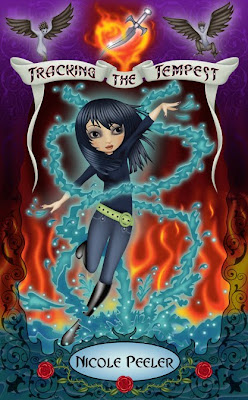 Valentine's Day is fast approaching, and Ryu - Jane's bloodsucking boyfriend - can't let a major holiday go by without getting all gratuitous. An overwhelming dose of boyfriend interference and a last-minute ticket to Boston later, and Jane's life is thrown off course.

Ryu's well-intentioned plans create mayhem, and Jane winds up embroiled in an investigation involving a spree of gruesome killings. All the evidence points towards another Halfling, much to Jane's surprise...


Tracking the Tempest is the 2nd book in the Jane True Series. Jane is a halfing, the offspring of a human father and and a selkie mother. Jane is an everywoman. She's more like most of us than the usual kickass, bare-midriffed, armed to the teeth urban fantasy heroine. In the first book, Tempest Rising, Jane finds out about her heritage and becomes embroiled in a mystery with Ryu, a baobhan sith, who investigates dastardly paranormal goings on. We get to go along as Jane discovers the world of her mother and in many ways discovers herself. Plus she gets a hot boyfriend in Ryu.

Tracking the Tempest continues Jane's journey of self discovery also in the midst of a mystery. Much of the book is set in Boston, Massachusetts and environs with a bit being set in Rockabill, Maine (Jane's home town).  Jane is once again embroiled in some nasty goings on in large part because of her relationship with Ryu. The events test both Jane's magical abilities, her commitment to Ryu, and her willingness to be part of the magical world.

This is a fast-paced, humorous, smart, well-written urban fantasy. While there are romantic elements and sex, the romance is not the focus of the book. There is also some violence that fits the book and is not gratuitous. The mystery is engaging and interesting. While there are dark elements in the story, this is not a dark urban fantasy. There are quite a few laugh out loud moments.

I like Jane tremendously. She's learning to use her powers, which are not inconsiderable, though not yet fully developed. She loves her father and her small hometown in Maine. She's smart and clever, but not unbelievably so. Jane also has a wonderful sense of humor and can dish some snark. I can't wait to see what happens with her next.

The other recurring characters in the series, Ryu, Anyan, Grizzie, etc, are well fleshed out. We learn more about them in Tracking the Tempest. The secondary characters are also well drawn and interesting.

While Tracking the Tempest can be read without reading Tempest Rising, I do recommend that you read the books in order. The books are written in the 1st person from Jane's point of view.