“Lemire and Sorrentino will go down as one of the greatest comic teams of all time. Gideon Falls cements that. Well, Green Arrow did, but this really REALLY does it.”
—Brian Michael Bendis

After selling out on multiple print runs, Lemire and Sorrentino team up to bring fans GIDEON FALLS #1: DIRECTOR’S CUT—a must-have for enthusiasts of the hot new series that Comic Book Resources calls, “a pure vision of terror.” This explosive first issue will be printed in glorious black and white to showcase Sorrentino’s masterful inks and will feature Lemire’s never-before-seen first issue script.

GIDEON FALLS is a series that explores the lives of a reclusive young man obsessed with a conspiracy in the city’s trash, and a washed up Catholic priest arriving in a small town full of dark secrets. At the heart of the town’s secrets is the mysterious legend of The Black Barn, an otherworldly building that is alleged to have appeared in both the city and the small town, throughout history, bringing death and madness in its wake.

“I know everybody lies in blurbs, but this comic really is amazing. Do not gloss over
these words. This is two guys at the top of their game.” —Mark Millar

"If you were a fan of Jeff Lemire and Andrea Sorrentino Green Arrow or Old Man Logan,
which were instant classics in the eyes of many, then check out this original story."
—IGN

"Jeff Lemire really knocks it out of the park with this comic. I highly recommend this
one. Give it a read." —Bleeding Cool

"Though Lemire is one of the busiest writers in the industry right now, the sheer
volume, diversity, and high quality of his output is remarkable. He doesn’t lose a step
here nor does Sorrentino, who is composing here at peak level too... I left the
experience of Gideon Falls more than ready to see how the mystery of this odd town
plays out in the next chapter." —The Comics Beat

“Sorrentino’s art offers some visually complex layouts that I found to be quite
compelling. Overall, I’m really enjoying this story and the mysterious complexities it
brings.” —Impulse Gamer 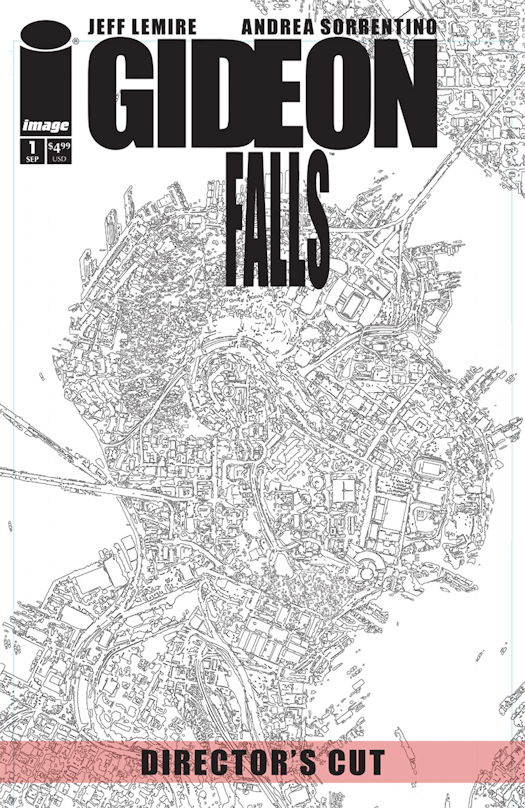